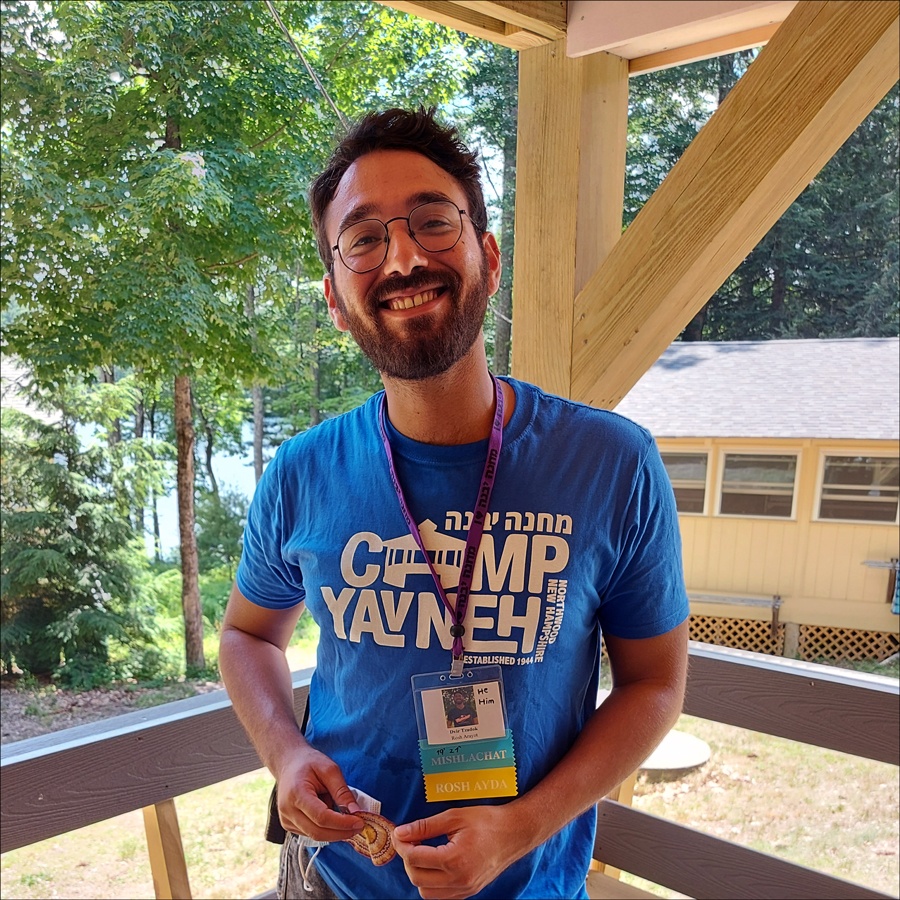 Dvir, Camp Yavneh - New Hampshire
Dvir, 24, is from Kiryat Shmona, a city in the Galilee region of northern Israel. This summer, he's serving as a Rosh Edah (unit head) for eighth graders at Camp Yavneh in Northwood, New Hampshire.

Every year, Camp Yavneh has a Yom Yisrael (Israel Day). It’s an entire day dedicated to celebrating Israel’s customs and culture and it allows the campers to learn about and love Israel. Like any other thing we do in camp, the day is divided into fun parts and serious parts.

This year, there were multiple stations where the camp Shlichim ran activities for the campers to learn about different aspects of Israel. For the younger campers, the stations were about the fun cultures and Israeli shticks. For the older campers, we dared to ask them some hard questions, such as how knowledgeable they were about Israel and how connected they feel, and had a very intense discussion about whether it is their Jewish obligation to support Israel. The older campers also deserved to have some fun so we had them run around camp on a scavenger hunt to learn about the meaning and histories of the names of buildings at camp.

Right after lunch, each Edah (unit) went to the shuk (market) where they got a glimpse of what an Israeli shuk looks like, from the sounds to people everywhere, and of course, buying the best stuff that Israel has to offer !!

At the end of Yom Yisrael, we had a Tekes (ceremony) that is very much like a combination of Israel’s Memorial Day and Israel’s Independence Day ceremonies. We lit 12 torches for the 12 tribes of Israel to express how we are all one part of the Jewish nation. During the Tekes, every Edah performed an Israeli song or dance.

At the end of the day, we all stood up and sang Hatikvah. This is one of the moments why I came back to camp. I have never felt more Israeli and Jewish than singing Hatikvah 12 hours away from my homeland with 500 people — and the only thing we have in common is that we are all Jewish and celebrate Israel. It was truly one of the most powerful moments of my life. Leading Hatikvah and understanding that right now at camp, I am the representative for my country. And of course, the night could not without Israeli dancing and singing. 😊

The combination of serious and fun and crazy at camp really parallels Israel. Israel is a serious country in a very serious situation, but we also really really know how to have so much fun!

In Camp Yavneh, every Wednesday is an Achla Yom (Great day). It’s a day we differentiate from our normal schedule and do something else. In previous years, it was a day that we went out of camp for hikes or visit to water parks, pools, movie theaters and other cool stuff.

This year, we couldn’t do our normal Achla Yom because of COVID so we had to do it in camp.

Every Edah (unit) went through the different stations and just had so much fun the entire day. Of course, we also had our time in the Agam (Lake) and we finished the day with an amazing BBQ!

This week, though I had a lot of office work to do (being a unit head), I told myself that I am going to spend the entire day with the kids. This was hands-down my favorite day in camp so far!

Seeing all the chanichim (campers) enjoying themselves so much and running around with big smiles on their faces gave me the most amazing feeling.

Sometimes I really get caught up with work and the serious side of a summer camp and can spend an entire day in the office. So it was really great to just put everything aside and go spend time with the kids. Because it is a summer camp and we should have fun every day!

And the biggest thing I take from this day was that for your kids to have an amazing day you really just need a little bit of a change from a normal day and a lot of Ruach (spirit) — and of course, letting them dunk you in the dunk tank helps a lot! 😊

The end of the first session at Camp Yavneh is always a big event! Last Thursday, we had a singing competition for the whole camp that is called zimriyah (a.k.a Zim).

Each Edah (unit) needed to perform three songs: one an Israeli song, one a Chasidic song, and the last one is called Shir Edah (unit song). It could be any song the campers wanted but they had to write their own Hebrew lyrics for it. The lyrics were supposed to describe everything they liked about camp and are filled with every Edah inside joke.

All the kids, whether or not they sing at home, take part in this amazing night. We have a saying in Camp Yavneh, “364 for 1,” meaning all the other days of the year are in preparation for and leading to this moment. But this year, it was, “729 for 1” since camp in 2020 didn’t happen.

The kids practiced for weeks, playing the songs in the bunk, and spending their free time practicing solos and harmonies.

The entire day of Zimriyah is a festival. Beginning first thing in the morning, campers come down dressed in their Zimriyah shirts from the previous year. The excitement of competition can be felt in the air. Zimriyah is a special day because the whole camp comes together. Before it is announced which unit won, the camp comes together and sings the camp’s song, Dor L’ Dor (from generation to generation).

Singing the song together reminds every camper and counselor of the camp’s values of Klal Yisrael and the fact that we are all a part of Yavneh’s past and future. My Edah won second place for Shir Edah and first place for our Chasidic song! Overall, we took second place out of all seven unit groups! It was an amazing experience watching everybody learn so many Hebrew songs and seeing what a big part Hebrew plays in camp life.

Our second week of camp is underway and things are going great!

This week, the three youngest age groups celebrated Yom Israel, a whole afternoon designated for activities about Israel to make the kids grow to love and get familiar with the culture of the country. We decorated the dining hall where we eat with blue and white banners, flags, and a lot of balloons!

The whole day was shvil israel (Israel national trail)-themed. We had a few stations that introduced places throughout Israel such as Haifa, the Dead Sea, and Jerusalem. Other stations taught what the places symbolize. For example, Tel Aviv was about respecting everyone, Eilat discussed where the flag of Israel originated, Kinneret covered the water crisis in Israel and many more important places!

The day was amazing and the kids had an incredible time thanks to all the amazing camp Shlichim.

The second activity we had this week was a madlud which stands for “madrichim lomdim,” meaning counselor learning. A friend and I led a session about Israel and antisemitism. We talked about how we can discuss and perceive certain unfounded criticisms of Israel as not just criticism, but as an antisemitic notion and covered The three D’s: Demonization, Double standards and Delegitimization. We also talked about the Israeli-Palestinian conflict and the consequences that posting an uneducated opinion on social media can have — especially as a Jewish person.

Overall, we are trying to balance camp being fun with also being educational and helping the campers and counselors alike develop a love of Israel. Even if we don’t all live there, it is still a place that we all can call home.

I want to tell you a little bit about my camp, its mission and the processes and questions we are currently facing.

Camp Yavneh is a camp for “Klal Yisrael” which translated to “all of Israel.” This means anyone who defines himself as a Jew — no matter what stream of Judaism they come from (Orthodox, Conservative, Reform or anything else) — is welcome to be a part of the camp.

I believe the goal of the camp is to provide an experience of Klal Yisrael, to recognize the different streams of Judaism and the way they operate to create a special Jewish community that crosses the various streams.

Because of the understanding that prayer is a personal thing that needs to come from a real place for each individual, throughout the week there are several minyan options so each person can pray in the place that is most comfortable for them. On Friday evening and Shabbat day, there are communal prayers in which the whole camp prays together in the minyan that has a partition separating boys and girls.

Recently, in the US and globally, awareness of LGBTQ people has grown, allowing more and more people to come out and be who they really are, often defining themselves by their inner affiliation and not by a specific gender. And this summer, we have a number of campers who define themselves as nonbinary (not identifying as male or female). Because of their identities, they feel they have no place to pray in the minyan with a partition, which has only two sides: boys and girls.

And therein lies the problem. As a framework that defines itself as ‘Klal Yisrael’, we want to make everyone feel as comfortable as possible and understand the value of including different ways of life. In the past, this meant bridging the gaps between the various currents in Judaism. Today, it is a matter of making the camp accepting of anyone — male, female, and nonbinary — who wants to take part in the camp.

We want to be a community that does things together as a community. But I know that no one stream necessarily feels completely comfortable. However, everyone does feel we are a community. And that is powerful and makes our discomfort worth it.

I am very grateful we are able to unite as a Jewish community. In Israel, this is the most obvious thing, but here? It takes effort. And part of that effort is to be uncomfortable. Especially if one chooses to be in a camp that accepts everyone, because unity does not mean uniformity, and that requires compromise.

GET TO KNOW DVIR:

Why did you decide to be a summer camp Shaliach (Israeli emissary)?

I came back to camp because I fell in love with the Jewish community at Yavneh.

Why do you think that Camp Shlichim are important?

Shlichim are very important at Camp Yavneh as they interact with everyone — staff and campers alike — on a daily basis. And as Shlichim, we have two big roles. One is to bring the culture and favor of Israel to camp. The second is to make Israel accessible even for young campers that have never been there and really act as an “emissary.”

What do you think your biggest challenge will be?

Leading 63 kids and 13 counselors is daunting but my co-Rosh Edah and I make a great team, combining our Yavneh experience and educational experience together — but there’s still much to learn!

What’s a fun fact about you?

When I was in preschool, I choked on a circularly cut carrot. Because of my choking incident, Israel made a nationwide rule that carrots cannot be cut into this shape in order to prevent other kids from choking as I did. In conclusion, I saved all the children of Israel from carrots. 🥕