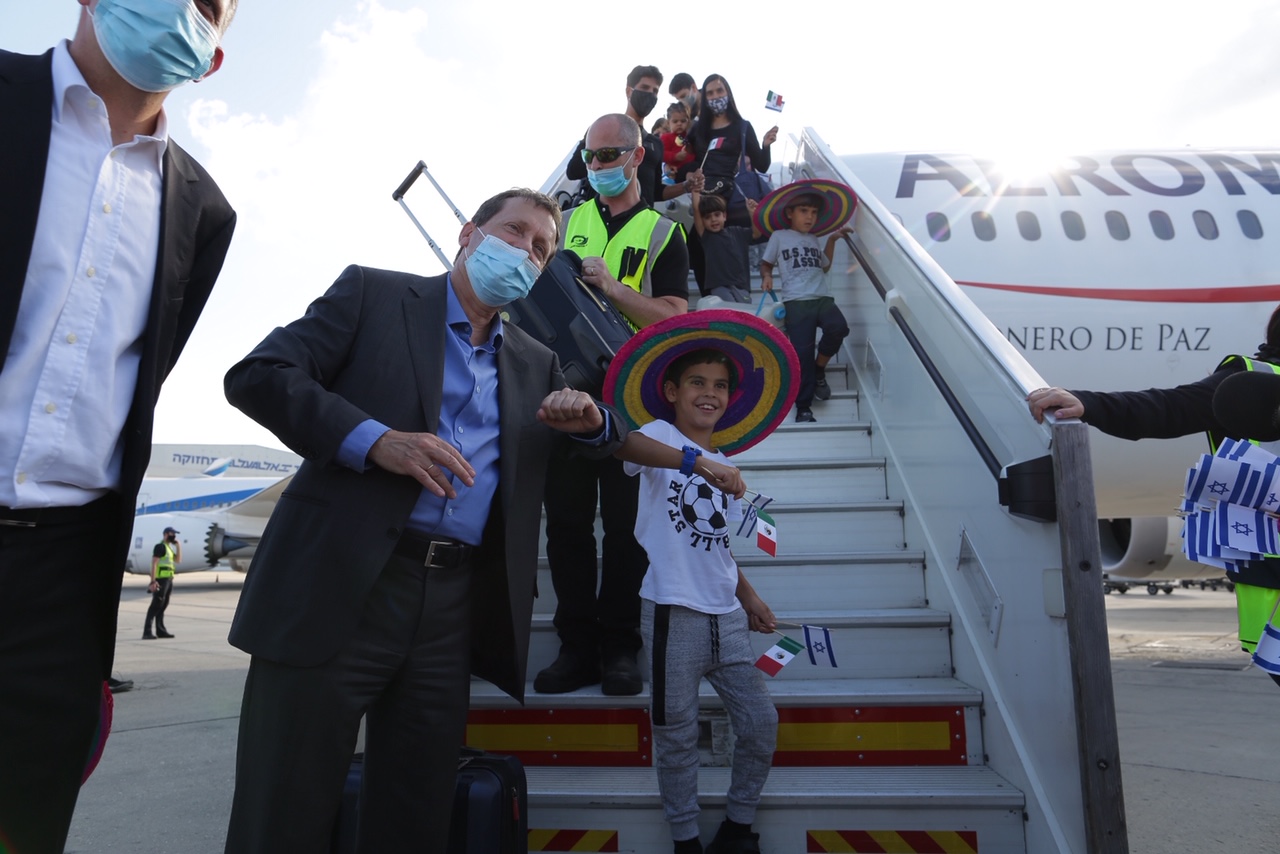 share
A young boy is greeted by Jewish Agency Chairman Isaac Herzog as he lands in Israel. Photo credit: Dudi Salem, The Jewish Agency for Israel.

Taking off from Mexico City, the special flight carried 50 new olim and 150 Hanoar Hatzioni graduates who will take part in Masa, a project co-founded by The Jewish Agency and the Government of Israel which today is the international leader in connecting young adults with immersive, long-term experiences in Israel. Additionally, “Operation Home” brought back dozens of Israelis who have been stranded due to the limited availability of flights during the COVID-19 pandemic.

“Aliyah has never stopped, even during the most difficult crises the State of Israel has experienced,” said Chairman of The Jewish Agency Isaac Herzog. “Even now, during a global crisis, Jews from all over the world are realizing the Zionist vision and making their new home in Israel. This is a story that touches all Israelis, as most of us are part of our family’s first, second or third generation here in Israel.”

Mexico is home to the third-largest Jewish community in Central America (after Argentina and Brazil) with approximately 50,000 Jews, most of whom live in the country’s capital of Mexico City. The Mexican Jewish community is highly organized, maintains close ties with the State of Israel and has an extensive education system featuring Jewish day schools and Zionist youth movements. Yet since the outbreak of coronavirus, many of Mexico’s synagogues and other Jewish institutions have closed, while schools and youth movements have moved to virtual operations.

“Today we’re seeing the beginning of a wave of immigrants to the State of Israel that will absorb about a quarter of a million new immigrants over the next five years, including young people, academics, entrepreneurs and professionals,” Herzog said. “This will be a diverse Aliyah from around the world that can also help spur economic growth. The State of Israel must seize this opportunity. I call on the Government of Israel to meet with The Jewish Agency and other bodies involved with Aliyah to prepare a national plan to capitalize on this golden opportunity.”

After landing today, the new immigrants from Mexico began the required two-week quarantine, and are operating in compliance with Israel’s Ministry of Health guidelines and other coronavirus regulations. At the end of their quarantine, the olim will be integrated into local communities and absorption centers throughout the country. The members of Hanoar Hatzioni will begin Masa’s Israel Challenge and Shnat Hachshara programs, during which they will volunteer on kibbutzim and for Magen David Adom, among other sites and organizations.

Carlos and Miriam as well as their four children arrived on today’s flight from Mexico City. After visiting Israel last year, they knew they wanted to make Aliyah.

“Here, I feel truly at home,” said Miriam. “In Mexico, we are always viewed as ‘those Jews’ and never felt safe to go out with a kippah. We knew we would always be a minority.”

Nevertheless, the family initially hesitated to take the final step and move far away from their family to a country where they barely spoke the language. Yet the COVID-19 crisis led them to understand how they would be able to be comfortable in Israel and enrich their lives there. They began the Aliyah process in May, and today made their way to their new home city of Ra’anana.

“While we were in lockdown in Mexico City, we understood that we’d do just fine on our own in a new country,” Miriam said. “Being at home alone for three and a half months taught us that we’re a strong family, and a family capable of making this change. I want to thank The Jewish Agency, its Global Center and the Israeli Embassy in Mexico; it’s hard to put into words their endless and incredibly moving efforts to make our Aliyah happen.”

Meir, Jenny and their two kids were also on board the flight. Meir’s father fought in the Six Day War and was a soccer player for Hapoel Tel Aviv and Israel’s national team. At the Olympics in Mexico in 1968, his father met his mother and stayed in Mexico, so Meir was born there — but he always had a special connection to Israel.

“Jenny was worried about moving to Israel until we visited two years ago,” Meir recounted. “When she asked people until what time at night she could walk outside, they didn’t understand what she meant and why. This made her realize how different life would be in Israel than in Mexico.”

Meir and his family were supposed to make Aliyah in April until the coronavirus delayed their plans. When a Jewish Agency representative called with the special flight information for the Mexican charter, they knew they had to be on it or else they wouldn’t get out of Mexico any time soon.

“I always wanted to go back home,” said Meir. “And it was an amazing feeling to be able to move to Israel on a flight that was called “Home.”