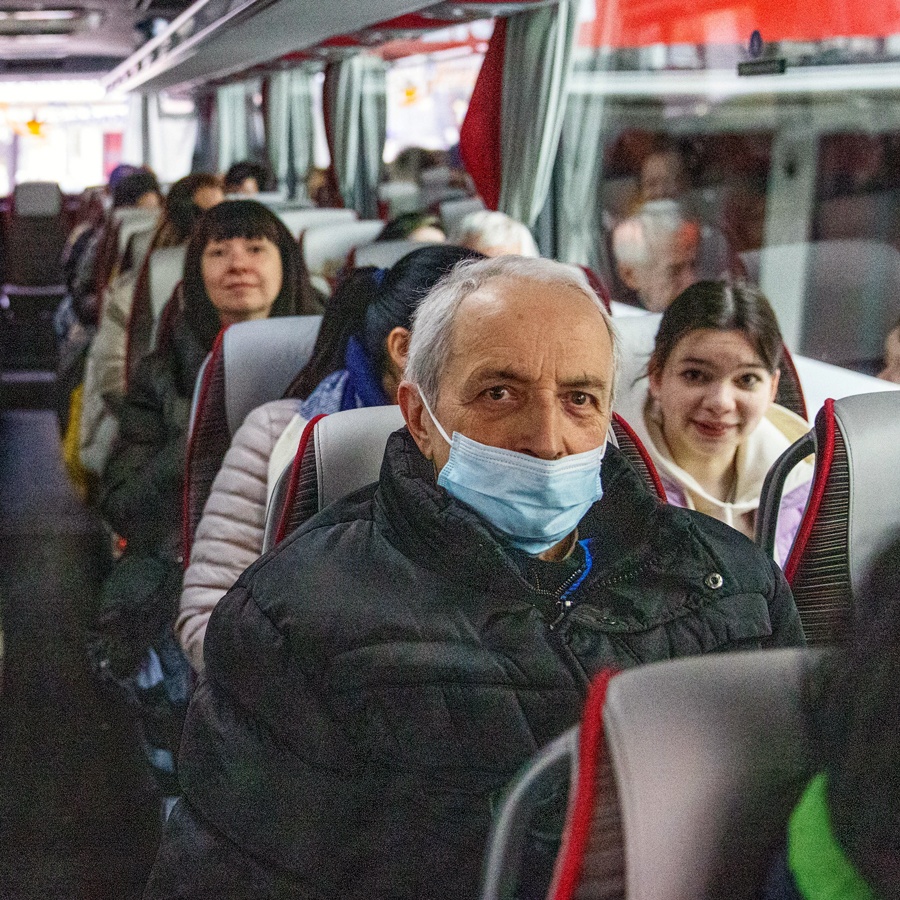 10 Mar For Ukrainian Refugees, The Future is Uncertain

For Ukrainian Refugees, The Future is Uncertain
Since the outbreak of the Russia-Ukraine war, the relative serenity at the Barash border crossing has abruptly turned to chaos. Approximately 150,000 Ukrainian refugees have crossed the border into Hungary, some through the Barash station, with Jewish Agency staff there to assist.

On Tuesday evening, Jewish Agency Shaliach (Israeli emissary) Michael Yaakov makes the four-hour journey from Budapest to Barash, a town of 1,000 residents near one of the border crossings to Ukraine. Since the outbreak of the Russia-Ukraine war, the relative serenity at the Ukraine-Hungary border has turned to chaos. Approximately 150,000 Ukrainian refugees have crossed the border into Hungary, some through the Barash crossing. Michael and other representatives of The Jewish Agency meet the refugees to assist in the crossing process involving the border police and customs, then house the refugees in hotels in Budapest and handle logistics for their immigration to Israel.

At night, the crossing is closed on both sides of the border, and the refugees have nothing to do but wait long hours. They receive small portions of food, as well as hot drinks and thermal blankets. But for those who have been through severe trauma in escaping under fire, at a temperature that can reach three degrees below zero, the situation at the crossing means additional hardship. Michael spends the long hours of the night with the refugees. In the morning, the crossings open and the refugees begin to flow slowly to a place of safety. Every spare minute of Michael’s time is spent on the phone, which keeps ringing and beeping with messages and calls from people trying to escape Ukraine.

On Tuesday, a few dozen people waited for the border to open, including 42 Jewish refugees rescued by The Jewish Agency on a bus from the town of Truskavets. In recent days, several buses have taken this route into and out of town, despite bombs, sirens and warnings of danger on the roads. Many refugees tote just one suitcase, and some carry the few belongings that they can bring with them – in essence, their whole life now – in a plastic bag.

They would gladly replace the belongings they leave behind with the family members that could not come with them: mostly men who are forbidden to leave the country, but also others who refuse to leave their home and homeland, despite the great danger. At six in the evening, the last refugee from the group, a 75-year-old woman, crosses the border. She points to the marks on her face, explaining she was standing very close to a rocket when it exploded. She is frightened and confused, and Michael hurries to help her through the transition process.

Before the war, Michael was an emissary who focused on the issue of employment, helping Jews in Ukraine and neighboring countries find work while they were in the process of immigrating to Israel. COVID-19 interrupted his activities, but they resumed in November, until about two weeks ago when he was summoned to Hungary to assist Ukrainian refugees.

Shuttles run by the Caritas Internationalis organization collect the refugees. They are tired and apprehensive about what lies ahead in their uncertain futures. Upon arrival at the local cultural center, which the town of Barash offered to house the aid, they receive a bed to sleep on, clothes, blankets and food for adults, babies and even pets. Hungarian children’s paintings of support and love for refugees hang on the walls of the center. “The response to our recent request for donations is amazing,” said Richard, who runs the center on behalf of Caritas. “We get a lot of equipment.” He points to a tent full of baby strollers, car seats, and other items for refugees.

As is the case in other centers around the border, the center in Barash has charging stations for laptops and smartphones in every corner, and a high-speed Wi-Fi network so refugees can be in touch with their families until they can purchase a new SIM card or receive a donated SIM. The center accommodates only 65 people, and once it fills up, the refugees are sent to border crossings and other centers in the area.

Along with the volunteers who run the center, refugee field coordinator Valery Spitza, who was hired by The Jewish Agency, works there to make sure the refugees receive what they need and collect their details for the subsequent transfers to hotels in Budapest. The 32-year-old Valery is himself a Ukrainian refugee, who quickly found himself in the role of helping his homeland. He got stuck in Hungary after attending a Jewish Agency seminar on Jewish communities – a program that ended just as the war with Russia broke out.

According to Valery, the situation in the border area is relatively safe, but that will not necessarily last for long. He is in daily contact with his family who are still in Ukraine. “A few days ago, there was a bomb in a nuclear reactor next to them, and a fire broke out there. We were afraid that there would be a disaster similar to Chernobyl, and I was with them all night on the phone to make sure they were okay,” he said.

Many of the refugees are not yet processing what has occurred during the conflict.

“On the morning of the war, I did not wake up from the bombing in Kiev, but from a call from my father asking me if I was okay,” said Anastasia Streltsova, 22, one of the members of the group who was rescued from Truskavets. “I bought train tickets to Lviv for that evening, to stay out of danger.”

In terms of her belongings, Anastasia took a yellow backpack with some personal gear as well as a pink bag with documents and a laptop. That is all she currently has.

Anastasia’s parents stayed in Ukraine with her grandparents, and she persuaded her friend Jeanne to accompany her on the journey so she would not be alone. Anastasia’s plan is to join a Masa Israel Journey program, or to perhaps pursue her passion of art in some capacity or stay in Israel as an immigrant. “I have an uncle in Be’er Sheva. When I get to him, I can be calm,” she said.

When the bus arrives at eight at night, the refugees board it with the little belongings they managed to bring from home. The journey takes four hours. The comfortable, quiet seats allow passengers to do something they have not been able to do for days: sleep. Upon waking up, they are already inside Budapest, where they will stay for the next few days in a hotel, and then decide how to start their lives anew. Some will do so in Israel.

Valery and Michael are not on the bus; they drive in a separate vehicle and have already started planning for the next day as 500-600 refugees are expected to arrive on Thursday evening, including 150 Jews rescued by The Jewish Agency. Another sleepless night lies ahead of them.