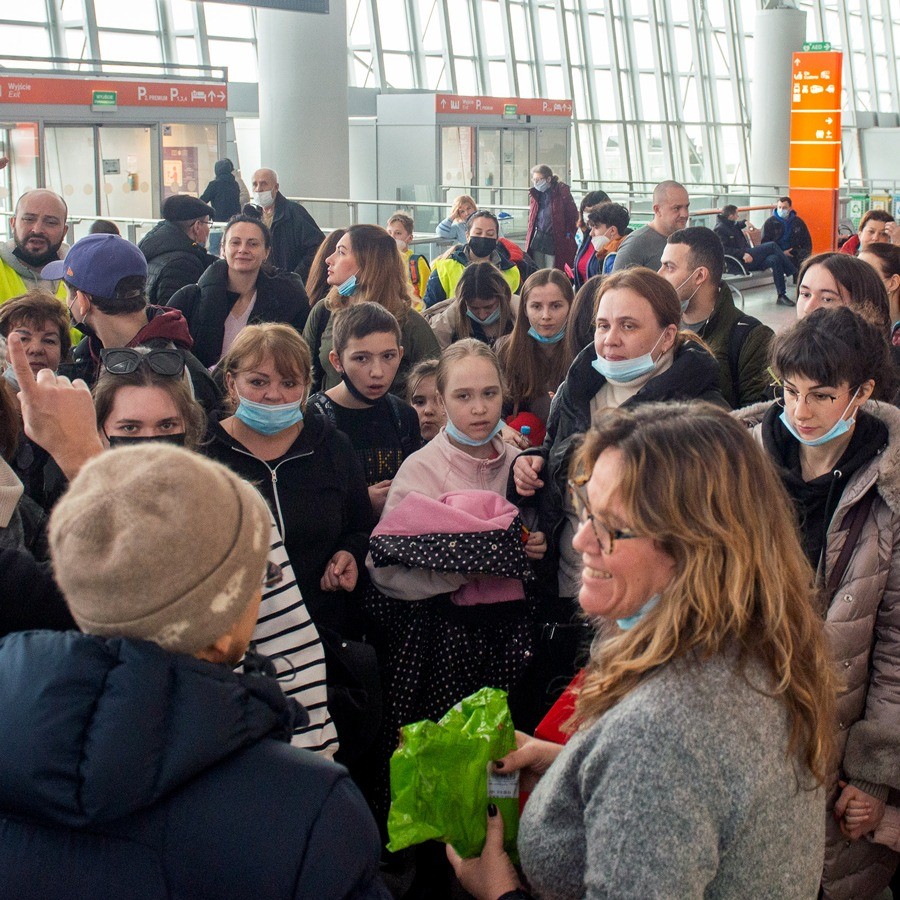 Jewish Agency CEO from the Crisis Zone: ‘We’re saving a life a minute’
From conversations with refugees to meetings with local volunteers in Budapest and Warsaw, The Jewish Agency’s Director General and CEO Amira Ahronoviz had a packed schedule during her 48-hour visit to the region.

A hotel in Budapest has transformed into the temporary home of dozens of immigrants who fled the war in Ukraine. According to local sources, 150,000 Jewish refugees have fled to the country since the outbreak of violence two weeks ago and those numbers are only expected to grow.

Four hundred Aliyah-eligible immigrants are housed in one of the three hotels rented out by The Jewish Agency. The organization is already exploring the option of renting out more rooms in the city for the influx of Jewish refugees expected to arrive. Amid the confusion and chaos, refugees also harbor real fears about the days to come. Some have visited Israel before and have a connection to the country, but still have apprehensions about how they’ll learn Hebrew and earn a living.

“Starting a new life in Israel will not be easy, but so many people are waiting for you there with open arms,” said Amira Ahronoviz, The Jewish Agency’s Director General and CEO, during her visit. She explained that there are currently 1.2 million Jews from the former Soviet Union in Israel who will be able to assist Ukrainian refugees with integrating into the country. Israel is also offering a benefits package for this wave of olim (immigrants) as well as hotel accommodation for a month that will be provided by the state. And the general population of Israel is eagerly anticipating helping these new immigrants start this new chapter in their lives.

Amira toured Warsaw and Budapest on Monday. There, she closely supervised how those looking to make Aliyah were being cared for and made herself available to answer any of their questions. “We will handle necessary visa and immigration issues and get you on flights as soon as possible,” she told a group of immigrants at the hotel. “But now you are safe, and you have what to eat and where to sleep.”

Also on Monday, a Jewish Agency information center was opened near the Budapest Nyugati (western) railway station. Jewish immigrants who make their way there and are eligible for Aliyah are provided lodging and a point person who will assist them in filing the necessary paperwork needed to move to Israel. Staffing the morning shift were Valerie Kaplan, 18, and Ilya Kluzny, 25, Ukrainians who attended a Jewish Agency seminar in Budapest about Jewish communities before the war broke out.

While at a small gathering celebrating the last day of the seminar, they received word that fighting began in Ukraine and they were stuck in the city – completely cut off from family and unable to go back home.

“I saw people leaving everything behind. These were my people. So it seemed fitting that I would stay and help,” Ilya stated.

Meanwhile, Valerie says her father enlisted in the Ukrainian army and her mother was looking to join her in Budapest. “It’s amazing. At the seminar, we discussed the idea that every Jew is responsible for one another. Then, as soon as the seminar ended, I found myself on the ground executing what we were taught.”

In the evening, Amira met with the volunteers, young Russians and Ukrainians alike, who shared the same singular fate: not being able to return home. She heard from them about their parents’ struggles and their interest in making Aliyah. She assured them The Jewish Agency would do everything in its power to find shelter for them in neighboring countries. For young people who are interested, she recommended they make Aliyah or, as an alternative, enroll in a Masa Israel Journey program, whereby they could live in Israel for two months to a year and then decide if they want to stay in Israel as new immigrants.

Between emotional meetings with volunteers and refugees at The Jewish Agency Information Center, Amira also met with Andreas Heisler, President of the Federation of Jewish Communities and World Jewish Congress Vice President, in Hungary. The two discussed the state of emergency that has arisen since the war began.

“The Hungarian government opened their borders immediately, even to those who don’t have the required papers,” Andreas said. “The government provided free transportation from the border crossings to the city. The Hungarian people, including its Jewish community, are happy to help those refugees who managed to escape but also those who haven’t managed to get here and need outside assistance.”

Amira told Andreas that the main objective for all Jewish organizations should be to help refugees start their life anew, whether that would mean assimilating to their local community or making Aliyah to Israel.

Before returning to Israel, Amira had a meeting in an unlikely setting: a classroom in the Beit Israel Center which transformed into a local consulate branch since the war began. There, she met with local staff members of The Jewish Agency who updated her on the procedures surrounding providing visas and immigration forms to refugees who want to make Aliyah. Anita Cherry and Sabina Matatov, who manage that process in coordination with the local Israeli Consulate, said they get 15 Aliyah requests per day and that number is steadily increasing.

Just before her conversation with that team, she met with Galina, 54, her daughter, Katrina, 32, and her four-month-old son, Mark. The three fled Kharkiv during the bombing, hiding in a local synagogue before they managed to flee to Budapest thanks to a Jewish Agency-chartered bus. Now, they are holding a visa to Israel in their hands.

“I’m happy we now have somewhere to live – Israel. We have family there and we’ll finally be able to reunite,” Katrina shared with Amira.

“The last 48 hours have been intense and emotional for me,” Amira said. “We’re in the midst of a war and we’re truly saving a life a minute here. I’m proud of our volunteers, staff, and Israeli emissaries who are risking their lives and working around the clock to save their brothers and sisters. I met with dozens of refugees, each story more heartbreaking than the next – long, cramped train rides and interminable treks on foot, sometimes in the dark freezing cold. It reminds me of the horrific stories we heard from World War II. It’s difficult to grasp that history is repeating itself.”

And, yet, there is still much work to be done. “We have many challenges ahead,” said Amira. “We need to change how we work so we can absorb even more refugees. We must locate everyone who wants help because, after all, if a person saves one life, it’s as if they saved the entire world.”