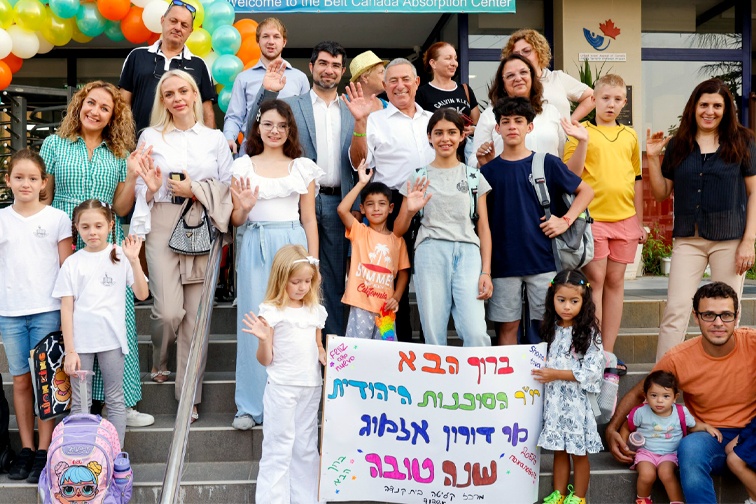 28 Sep Jewish Population Rises to 15.3 Million Worldwide, with Over 7 Million Residing in Israel

Jewish Population Rises to 15.3 Million Worldwide, with Over 7 Million Residing in Israel

Israel welcomes highest number of olim (immigrants) in last 20 years, as The Jewish Agency assisted 60,000 immigrants from 93 countries to make Aliyah during 5782

Jewish Population Rises to 15.3 Million Worldwide, with Over 7 Million Residing in Israel

Israel welcomes highest number of olim (immigrants) in last 20 years, as The Jewish Agency assisted 60,000 immigrants from 93 countries to make Aliyah during 5782

Chairman of The Jewish Agency Major General (Res.) Doron Almog with olim who immigrated to Israel this year from around the world. Credit: Guy Yechiely.

Jerusalem, September 25, 2022 — On the eve of the Jewish new year, the number of Jews worldwide stands at approximately 15.3 million compared to 15.2 million in the previous year, according to newly released statistics from The Jewish Agency for Israel.

Among the global Jewish population, the number of Jews in Israel is 7,080,000 (compared to 6,950,00 in the previous year), while about 8.25 million live outside Israel (including approximately 6 million in the United States). The updated estimates by Professor Sergio Della Pergola of the Hebrew University of Jerusalem will be published in the American Jewish Year Book 2022.

The numbers include those who define themselves as Jews and who do not identify with another religion. When also including those who are eligible for Israeli citizenship under the Law of Return, the global total rises to 25.5 million people, of which 7.5 million are in Israel and 18 million live outside Israel. There are 500,000 Israelis entitled to citizenship under the Law of Return who are not registered as Jews at Israel’s Population Authority.

The proportion of Jews living in Israel out of all the Jews in the world stands at 46.2%, an increase of one percent over the previous year. The estimated number of Jews in the U.S. remains stable, in accordance with in-depth analysis of the most recent survey conducted by the Pew Research Center.

The following are updated estimated Jewish population figures from additional countries as of January 2022, reflecting the core Jewish community and not those eligible for Aliyah under the Law of Return:

*The number of people waiting to make Aliyah to Israel from Ethiopia is estimated at several thousand.

The Hebrew calendar year 5782 also saw the largest number of olim (immigrants) in 20 years, with The Jewish Agency, in cooperation with the Ministry of Aliyah and Integration, assisting 60,000 immigrants from 93 countries in making Aliyah (immigration to Israel).

Jewish Agency data also shows that over a quarter of the past year’s olim were young people between ages 18-35. About 5,500 of these young olim, including hundreds of professionals from fields where there is a labor shortage in Israel, participated in special Jewish Agency programs that help them integrate into the job market and institutions of higher education. Another 2,200 young olim serving in the IDF while their families remain abroad (lone soldiers) received support from the Wings program.

Accomplishments and Goals for New Year

In 2015, The Jewish Agency operated in 65 countries around the world with the aim of strengthening the resilience of the Jewish communities in light of rising antisemitism and to foster a better connection to Israel among the younger generation of global Jewry.

A total of 15,000 young Jews from 60 countries came to leadership, volunteering and career programs in Israel, most of them as part of Masa Israel Journey, a joint program of the Government of Israel and The Jewish Agency and the global leader in immersive Israel experiences for young adults.

Over 3,500 community leaders and professionals from 41 countries took part in resilience and emergency preparedness training as part of The Jewish Agency’s JReady global emergency network. JReady was established following the outbreak of the COVID-19 pandemic to help promote resilience in global Jewish communities and provide them with innovative tools in the field.

Ninety-five Jewish communities in the world and 70 local authorities in Israel have established collaborative partnerships within The Jewish Agency’s Partnership2gether network during the past year.

Twenty-two hundred Shlichim (Israeli emissaries) served in Jewish communities around the world, where they work to strengthen both Jewish identity and connections with Israel. Eighty-seven of these Shlichim worked on college campuses as the Jewish Agency Israel Fellows, building the pro-Israel community and supporting students in fighting antisemitism and BDS.

Chairman of the Executive of The Jewish Agency Major General (Res.) Doron Almog: “Wishing a very happy New Year to the Jewish people the world over – a year of hope and a year of greater connection between us. The challenges facing us at the start of this new year are significant and important. We will work together to strengthen the strategic relationship between Israel and global Jewry and to strengthen Israeli society as a whole, for the sake of our common future. And to the tens of thousands of olim who arrived in Israel this year with the help of The Jewish Agency, I wish you all a very happy new year and a soft and successful landing. Welcome to Israel.”