Kindness After Terror and Destruction | The Jewish Agency 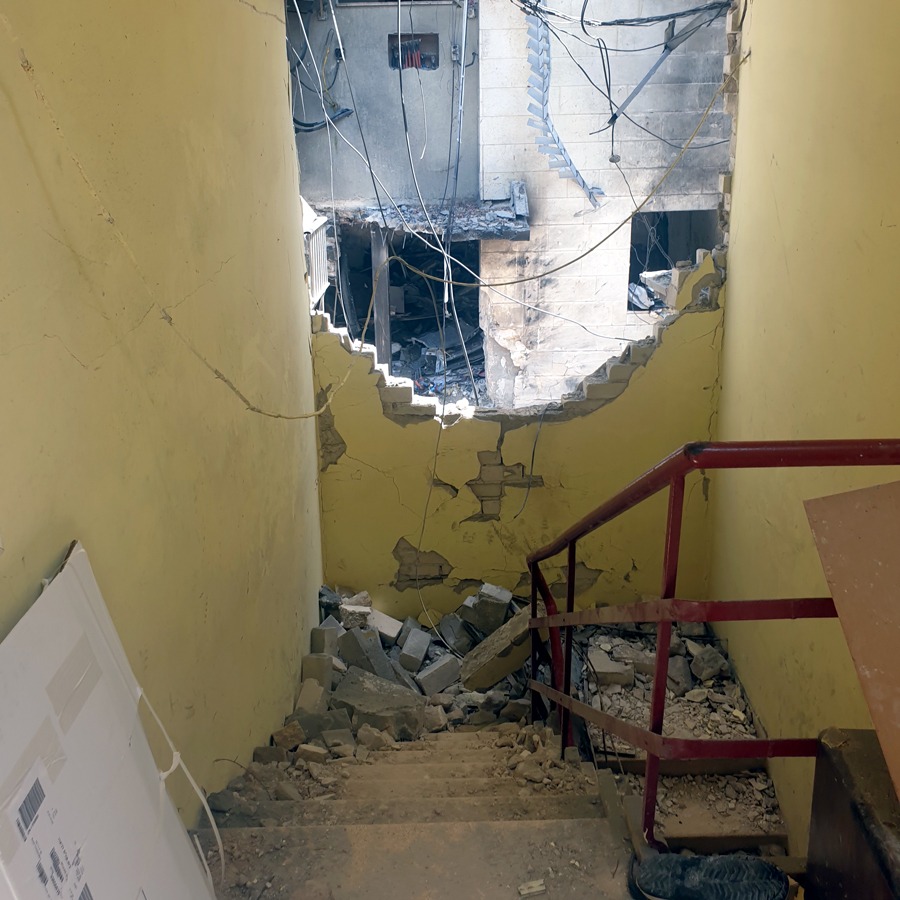 Kindness after Terror
For three families whose homes were hit by missiles, they are beyond grateful for the kindness and support received through The Jewish Agency’s Fund for Victims of Terror.

On May 20, it was a beautiful sunny Thursday in the calm city of Givatayim, which neighbors Tel Aviv. All seemed normal when Danielle Mor, The Jewish Agency’s Vice President of Israel and Global Philanthropy, came to meet three families. But things were anything but normal; and for the families of 46 and 48 Shenkin Street, normal seemed like forever ago.

On Tuesday night, amidst clearing the supper plates and putting their children to bed, yet another siren blared out, demanding they take cover within one minute. Despite Givatayim being so far from Gaza, every person does as they have been trained to do, taking cover in safe rooms and in the underground bomb shelter.

And they’re lucky they did. Seconds later, the buildings violently shook; walls tumbled down and glass windows shattered into millions of shards, sharp as knives. A rocket directly hit the ground floor of Shenkin 48, demolishing the apartment, burning down the two upper floors, and turning much of building 46 into rubble.

Danielle traveled to Givatayim to meet with Irit, Itai, Yosi, Maya and Sol, mothers, fathers, husbands and wives who now can grimly add “Victim of Terror” to their many titles.

Sol rents an apartment in building 46 and had no safe room, not even a proper staircase to hide beneath. Her plan, should a siren sound, was to use her one minute of warning time to enter building 48, making her way to the underground parking lot, where she would be safe. As she was resting in her apartment on Tuesday, her neighbor, a single parent, called to ask if she could babysit his four-year-old son. Though Sol was tired, she walked over to babysit the boy, whose home had a downstairs bomb shelter.

Irit owns an apartment in the 46 building which she has rented for years. Her son, Itai is married and the father of a baby girl. Due to COVID, Itai’s family’s finances are tight so Irit invited her son to live rent-free in the apartment she owns.

Maya and Yosi are a young couple living in a two-bedroom apartment in building 48, with their two children under the age of four. The children’s bedroom is their safe room.

All of their routines Tuesday were turned dreadfully upside down when the sirens went off.

Sol and the young boy she was babysitting headed immediately to the bomb shelter. The stairwell was full of smoke, shouting and screaming. Meanwhile, Maya and Yosi grab their sleeping baby and toddler. They are barefoot as they run down the stairs, over shattered glass on the ground, through the hazy smoke, holding tight to their crying children, trying to remain calm.

Despite their homes being severely damaged and destroyed, Irit, Itai, Yosi, Maya and Sol all realize how lucky they are. They hear of a grandmother in building 46 that covered her four-month-old granddaughter with her body, shielding her from shrapnel. Another neighbor appears to have lost his hearing, hopefully only temporarily.

“I met with each person, I heard their stories, and I let them know that the global Jewish family is by their side. Then I gave each family a check for 4,000 NIS from The Jewish Agency’s Fund for Victims of Terror to help alleviate the immediate hardships and spread to them a message of hope,” said Danielle. “They couldn’t believe they were getting this assistance and support, no questions asked, no forms to be filled, no bureaucracy, just simple kindness. And they were just so grateful.”

Learn more about the Fund for Victims of Terror

Fund for Victims of Terror, Israel