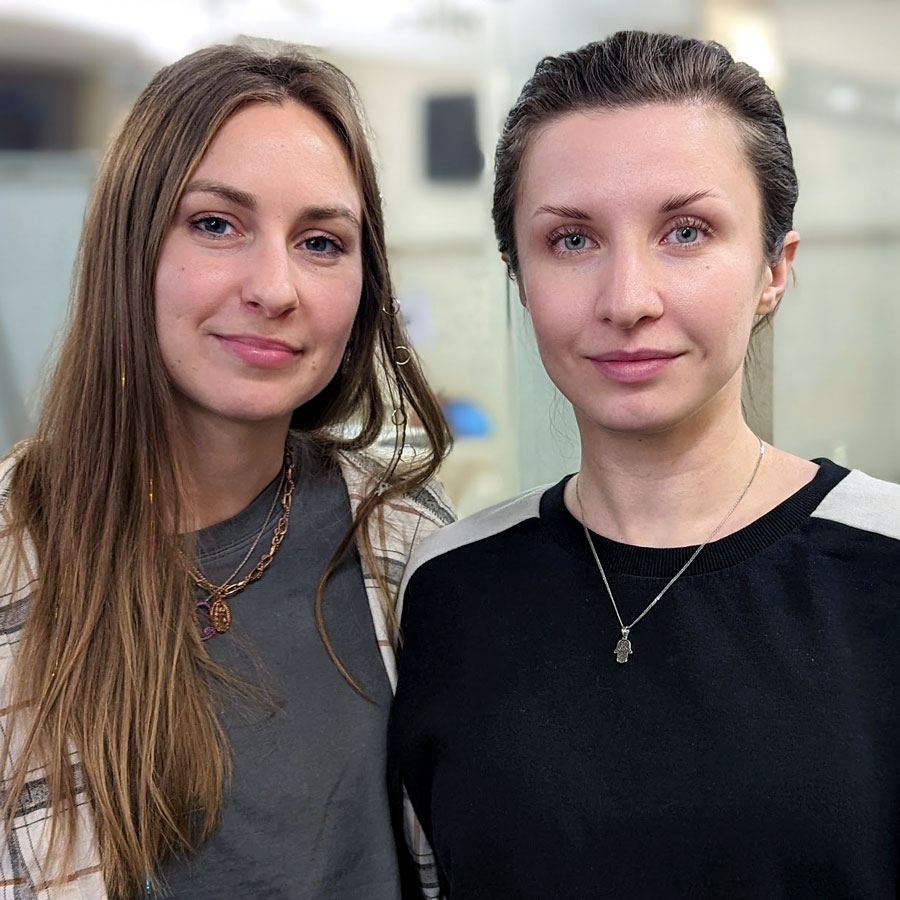 Long-Distance Friends Reunite to Help Jewish Refugees in Bucharest
Stasia and Olga met 13 years ago at school, then parted ways but kept in touch. It took the devastating war in Ukraine to bring them back together in Bucharest, where they are helping Jewish refugees.

For a mere hour in a Bucharest hotel lobby on a Saturday morning, life seems almost normal as some 10 children ranging in age from 6-10 play “Patty Cake.” But life at the hotel is anything but normal as the venue is being used for operations by The Jewish Agency, which is absorbing thousands of Ukrainian Jewish refugees in surrounding countries like Romania, Moldova, Hungary and Poland. In addition to lodging and food, the refugees receive psychological support, clothes, toys and medicine. After they leave the hotel, they will immigrate to Israel in one of the most complex Aliyah operations in The Jewish Agency’s history.

As a counselor for the children, Stasia, 29, is also serving as an official sounding board for the concerned adults at the hotel. An Israeli of Ukrainian descent, Stasia immigrated to Israel six years ago and works as a coordinator and instructor for two Jewish Zionist youth movements. As part of Stasia’s job, she was on a trip to Poland, where she coordinated logistics for a tour of Nazi concentration camp sites across Eastern Europe.

“The first day of the mission, I opened my phone and saw the news,” Stasia said. “So, I had to continue to work while being preoccupied with worry over the well-being of my friends and family. I have grandparents in Kharkiv, another grandmother in Belgorod — which is on the Russian-Ukrainian border — and a brother who lives in Moscow, so our situation is complex.”

When Stasia was informed that the hotel in Bucharest was looking for another counselor to tend to the children and support the adults, she had just the person in mind. Thirteen years ago, Stasia had met Olga, 29, at school, and the two quickly became best friends. Once Stasia moved to Israel, they continued to stay in touch over the phone and during annual vacations. Stasia reached out to Olga via WhatsApp, and the two had an emotional reunion amid the backdrop of war.

First, though, Olga had to get to Bucharest. She had already decided to escape Kharkiv, packing whatever clothes and belongings she could carry. She hitched rides with friends and acquaintances, and even total strangers, to the Kharkiv train station with the goal of getting to Lviv, and from there, Poland.

“Even though the roads were bombed, I decided to take the risk and leave for Lviv. I figured sitting around and waiting would be more dangerous,” she recounted. “When I got to the train station, there were a lot of people there trying to get out. I was not sure I’d be able to get on the train.”

Somehow though, she succeeded in boarding the train, but her journey was only beginning. The train was over capacity, with carriages reserved for four instead housing 10 or even more individuals. Passengers took turns sleeping on the floor. Due to long stops and the train changing its route to escape the line of fire, the ride took 31 hours instead of the usual 18. But even amid the dire circumstances, humanity still shined through as volunteers at stations waited for passengers with crates of hot food.

When she arrived in Lviv, Olga had to spend the night there due to curfew regulations. Then, again with the help of friends of friends, she found a place to stay for the night and from there, managed to drive to the border.

That night, Olga messaged Stasia, telling her she was fleeing to Warsaw. She was surprised to hear that Stasia was also coincidentally in Warsaw. They arranged to meet in Warsaw’s Old City and decide what their next steps should be. Just a few hours later, Stasia messaged Olga with an alternative offer: “Meet me in Bucharest. They need someone with your professional psychological experience, and they will provide you with a place to sleep and food.”

Olga came across other kind souls during her journey who helped her cross the border to get to Warsaw and find food and shelter.

“I wasn’t expecting such kindness from strangers,” she said. “When I met Stass, I couldn’t stop crying. We saw each other recently, in October in Hungary, but this is not the same thing. This was the first time I saw a close friend after I fled, and all the heavy emotions I was feeling at the time bubbled up to the surface.”

“She was late to our meeting, but she’s always late,” Stasia smiled, as the two women laughed. “But this time, she had a reason. I couldn’t imagine our meeting would be so emotional and I cried as well.”

Olga knew that after being helped by dozens of people along her journey out of Ukraine, she wanted to pay it forward and help others in return.

“Suddenly, this opportunity came up, so of course, I decided to work with Stass, even though I still haven’t fully processed what happened to me. Mentally I understand, but emotionally I’m still in Ukraine,” Olga shared. “But for now, I’m focusing on distracting people here from what happened to them and calming them down and, in turn, that helps and distracts me as well.”

Stasia added, “I’m happy that I’m here and that I have an opportunity to help. I’m at the right place, at the right time. Donating money and goods is very important, but I’m also getting to see the faces of people that I’m helping and I’m also helping my best friend and that’s amazing.”