On the Ground @ Warsaw Immigration Center | The Jewish Agency 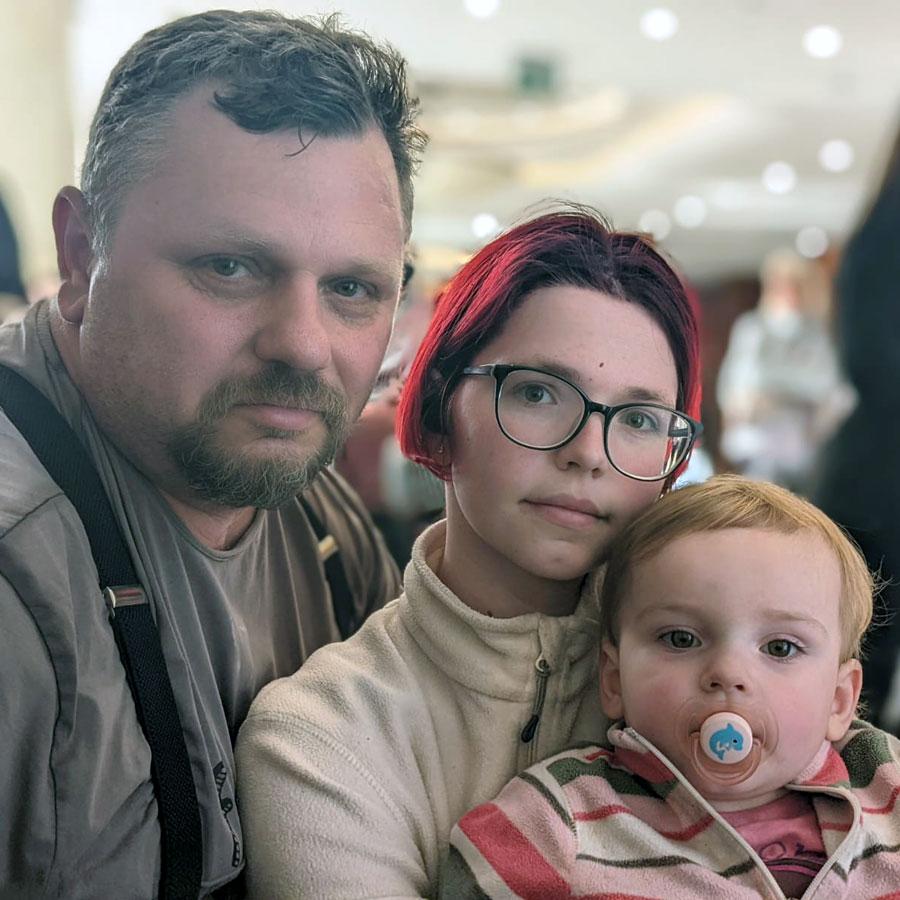 share
Andrei with his daughter Anastasia and granddaughter Alexandra in Poland | Photo: The Jewish Agency

Thousands of Jewish refugees are fleeing from Ukraine to neighboring countries. On Sunday, hundreds of these refugees who escaped the horrors of the fighting in Ukraine will land at Ben Gurion Airport in a joint operation by the Ministry of Aliyah and Absorption, The Jewish Agency, the International Fellowship of Christians and Jews, and thanks to donations from the Jewish Federations of North America, Keren Hayesod and other donors around the world.

At Ukraine’s border crossings, Jewish Agency emissaries have been waiting to help Jews leaving Ukraine immigrate to Israel. The lobby of a hotel near the Warsaw airport has become The Jewish Agency’s base of activity since Russia’s invasion of Ukraine. There, the agency’s staff, in expedited proceedings, organize immigration to Israel of Jews fleeing Ukraine. Most of these Jewish immigrants leave behind relatives, homes and property.

The hotel is just one of the centers where Jewish Agency emissaries are assisting Jewish refugees along the borders of the bombed-out Ukraine. Most Jewish women, about 90%, come to the center in the Polish capital. Ukrainian men were forced or volunteered to enlist in the army and defend their country. Men who did arrive at the immigration centers were under the age of 18, over the age of 60, or fathers of at least three children.

Maxim Lurye, The Jewish Agency’s Regional Director of Ukraine, is leading the emergency operations in Ukraine and extremely busy. He is responsible for locating as many immigrants as possible from Ukraine who are eligible to make Aliyah and helping them reach Israel.

“When we started preparing, we did not know from which direction Russia would attack,” Maxim said. “We prepared for all kinds of scenarios, but we did not believe that an event of this magnitude would happen. The teams in the field and our emissaries are working round the clock to rescue Ukraine’s Jews.”

A portable Israeli consulate was opened at the hotel to help Jews obtain an Aliyah visa. The refugees also receive clothes and food, psychological support and a hotel room, and within a few days, they receive final approval for Aliyah. The Jewish Agency is also organizing counselors to keep the children onsite at the center busy.

Prior to immigrating to Israel from Kyiv in 2013, Andrei Mazruinko, 47, was a lieutenant colonel in the Ukrainian Air Force. Of his three children, two live in Israel, while one, Anastasia, stayed behind in Kyiv with Andrei’s ex-wife. When the fighting broke out in Ukraine, Andrei flew straight to Poland to rescue Anastasia and her daughter, Alexandra – his granddaughter that he’d only met in video calls due to the pandemic.

“I arrived on February 28, a few days after the war broke out. Anastasia fled the second day by train to Lviv. The embassy there has already closed so they boarded a train that was supposed to travel two hours and arrived in Poland instead after 28 hours of driving,” Andrei recounted. “After reaching the border, the volunteers provided them with food and water. Here in Poland, I had a friend who picked them up and hosted them in Rzeszow, a city near the border, until I arrived. Then I got to meet my granddaughter in person for the first time. It was so moving; I was on the verge of tears.”

Needing further help, Andrei turned to the Israeli embassy in Poland, and was directed to The Jewish Agency’s Immigration Center in Warsaw. He wants his daughter and granddaughter to immigrate to Israel and The Jewish Agency is housing them and helping them. Nearly 1,000 Jews are being cared for in the immigration centers. The Jewish Agency estimates that in the coming month, the number will rise to 6,000-8,000 Jews who want to flee Ukraine, most of whom will want to make Aliyah. For this purpose, rescue buses are being recruited, and charter flights will bring humanitarian aid and return Jews to Israel.