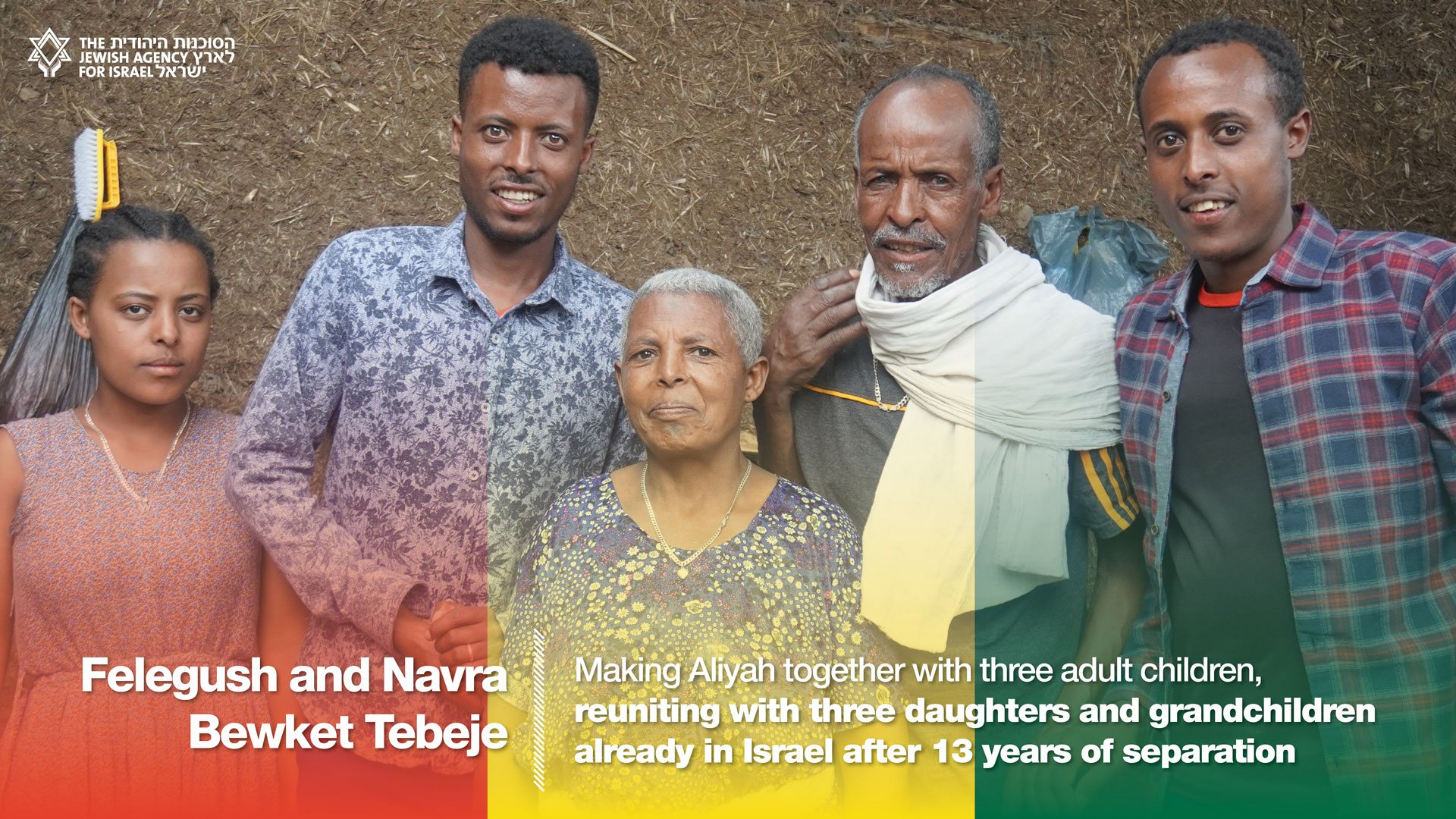 With Operation Zur Israel continuing in 2022, thousands more Ethiopian Jews will be brought to Israel to fulfill their dreams of Aliyah and reunite with loved ones. Many of these soon-to-be immigrants have waited decades, enduring hardships and struggling to hold on to hope, for the day they would get to go to Israel.

With Operation Zur Israel continuing in 2022, thousands more Ethiopian Jews will be brought to Israel to fulfill their dreams of Aliyah and reunite with loved ones. Many of these soon-to-be immigrants have waited decades, enduring hardships and struggling to hold on to hope, for the day they would get to go to Israel.

Click on the names below or scroll down to get to know some of the amazing Ethiopians who will make Aliyah imminently and read their powerful stories. 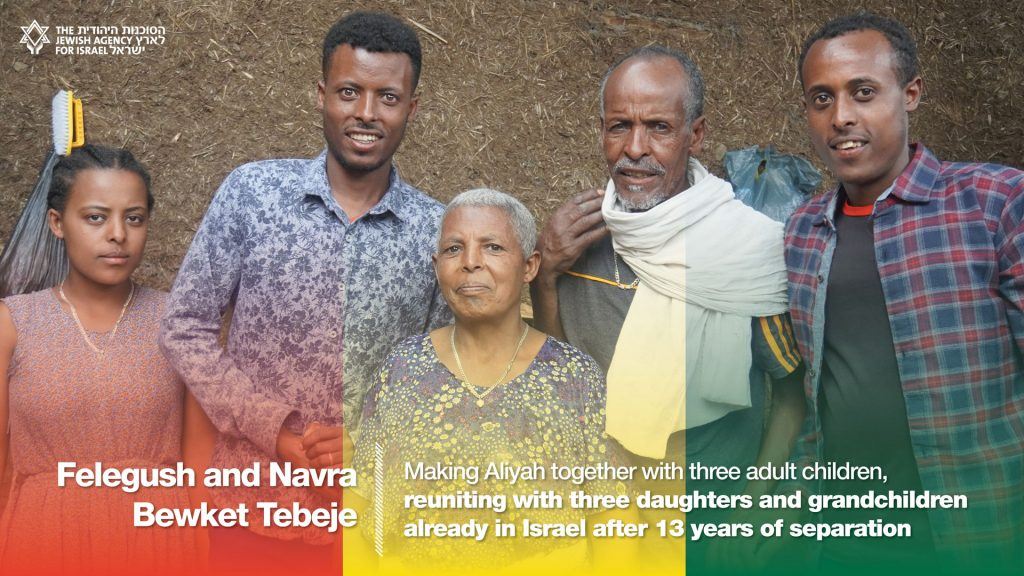 Felegush and Navra Bewket Tebeje made Aliyah with their three adult children (ages 28, 24 and 20) on June 1, 2022. They will live at the Avia Absorption Center in Be’er Sheva as they adjust to life in Israel.

Felegush and Navra are very excited to reunite with their three daughters who immigrated to Israel about 13 years ago and to meet their grandchildren who were born in Israel.

After living in a crowded apartment in Ethiopia and having difficulties finding work and earning a decent living due to their Jewish identity, the entire family finds it hard to express their joy in words that they will soon get to hug their daughters and live in the holy land of Israel. 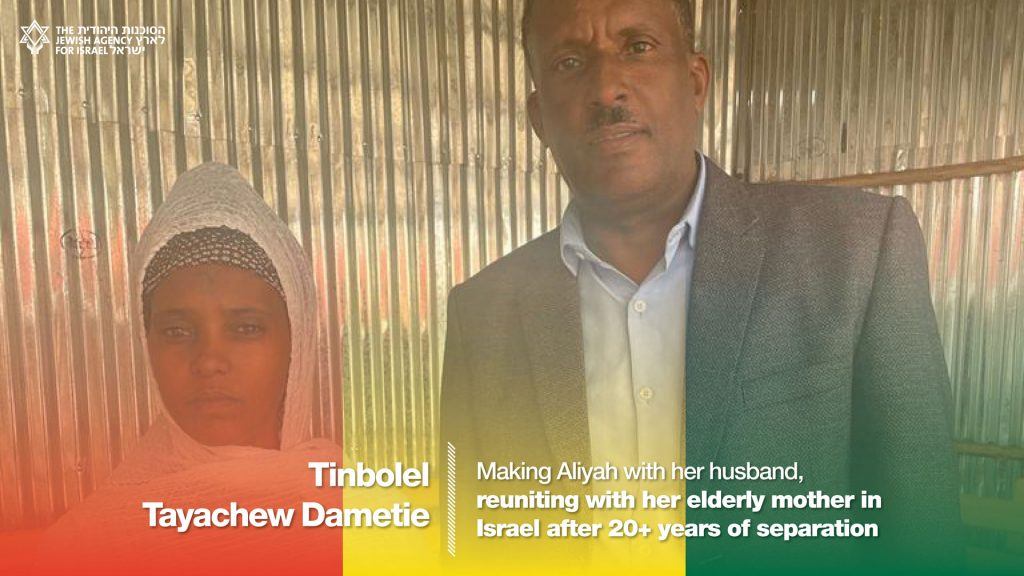 Tinbolel Tayachew Dametie made Aliyah with her husband on June 2, 2022. They will live at The Jewish Agency’s absorption center in Safed.

Tinbolel’s parents and brother immigrated to Israel two months before the birth of her eldest son, about 22 years ago. Going through labor without the support of her mother by her side was extremely hard. Professionally, Tinbolel’s husband Barhanu, a social worker, has seen the difficulties and mental stresses on families torn apart, with some in Gondar and Israel.

Tinbolel’s dream is to embrace her mother and visit the grave of her father who died about two years ago. Thanks to the continuation of Operation Zur Israel, Tinbolel and her three brothers and their families will be reunited with their elderly mother who they have not seen for over 20 years. 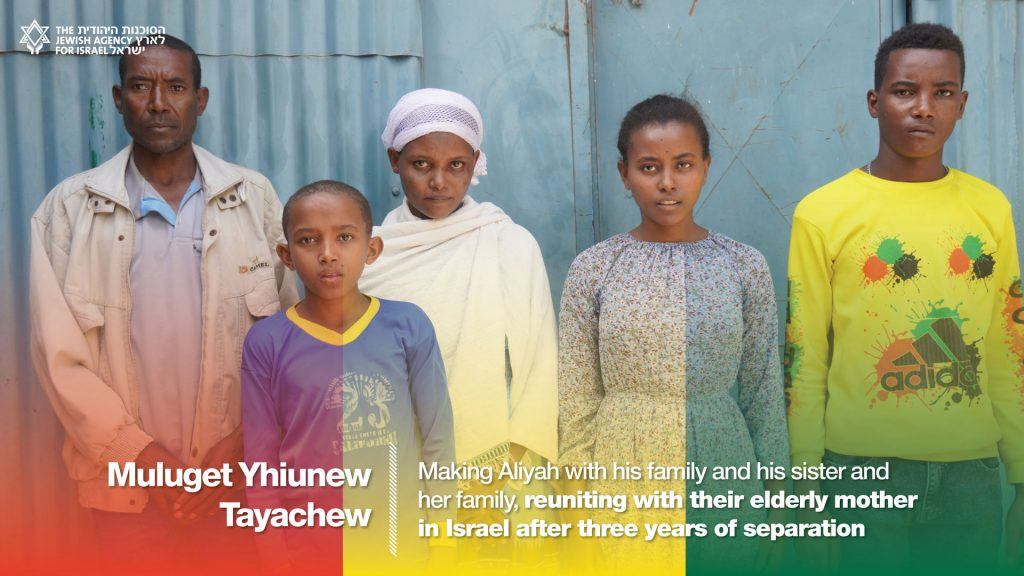 Muluget (50) and his sister, Belaynesh (44), along with their families and their three brothers will be reunited with their elderly mother who immigrated about three years ago.

Muluget is married to Languch (45) and they have three children: 20, 17 and 12. They have lived in very small apartments, struggling to make ends meet as the cost of living is high and even drinking water must be bought. However, despite financial challenges, the couple sent their daughter, Shita, to study pharmacy.

Muluget’s sister Belaynesh, is married to Inau (54) and they have three children aged: 12, 3 and six months. The family has not been able to send the kids to school due to financial difficulties. Belaynesh’s dream is that her children will be able to get an education in Israel.

They will all make Aliyah soon, thanks to the Government of Israel’s decision to approve the continuation of Operation Zur Israel. 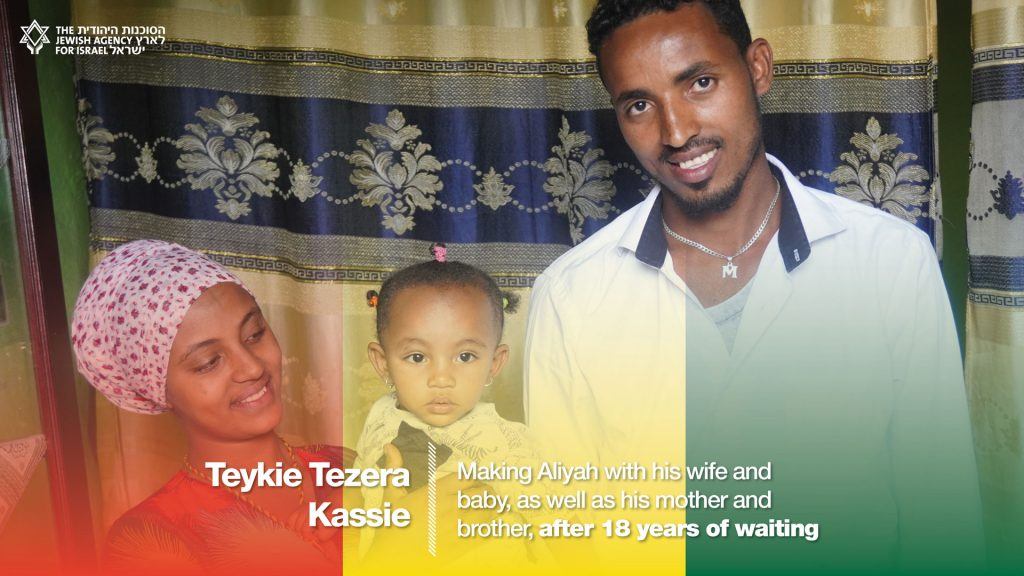 Teykie’s mother and brother left their village about 18 years ago and moved to Gondar to wait to make Aliyah. Initially, Teykie stayed behind in the village to work, so he could send money to his mother and brother, to help pay for the high cost of living in the city. Eight years later, he also left the village, joining his family in Gondar.

Batmanash, along with her mother and brother, left their village to move to Gondar 13 years ago. Her father immigrated to Israel fifteen year ago, when she was very young. The situation in Ethiopia has been complex, and increasingly so with the ongoing war. Batmanash’s younger brother was shot in the middle of the street one day while he was working to earn money to support the family.

Teykie and Batmanash met and married in Gondar, where they were both living and waiting with their families to make Aliyah. But as Teykie experienced and witnessed the struggles of Ethiopians waiting to immigrate to Israel, he decided to do something about it, starting a nonprofit with friends to help “Jews-in-waiting” in Gondar. The organization provides support in building renovations, food and clothing distribution, assistance with educational equipment for children, helping adults find jobs, and rent assistance.

“I’ve seen so many others experience problems far worse than mine,” Teykie said. “I’m young and can handle challenges. It’s hard for me to see others — the elderly, single mothers, and low-income families — struggle.”

The couple will make Aliyah with their 11-month-old baby in the coming months through the continuation of Operation Zur Israel.