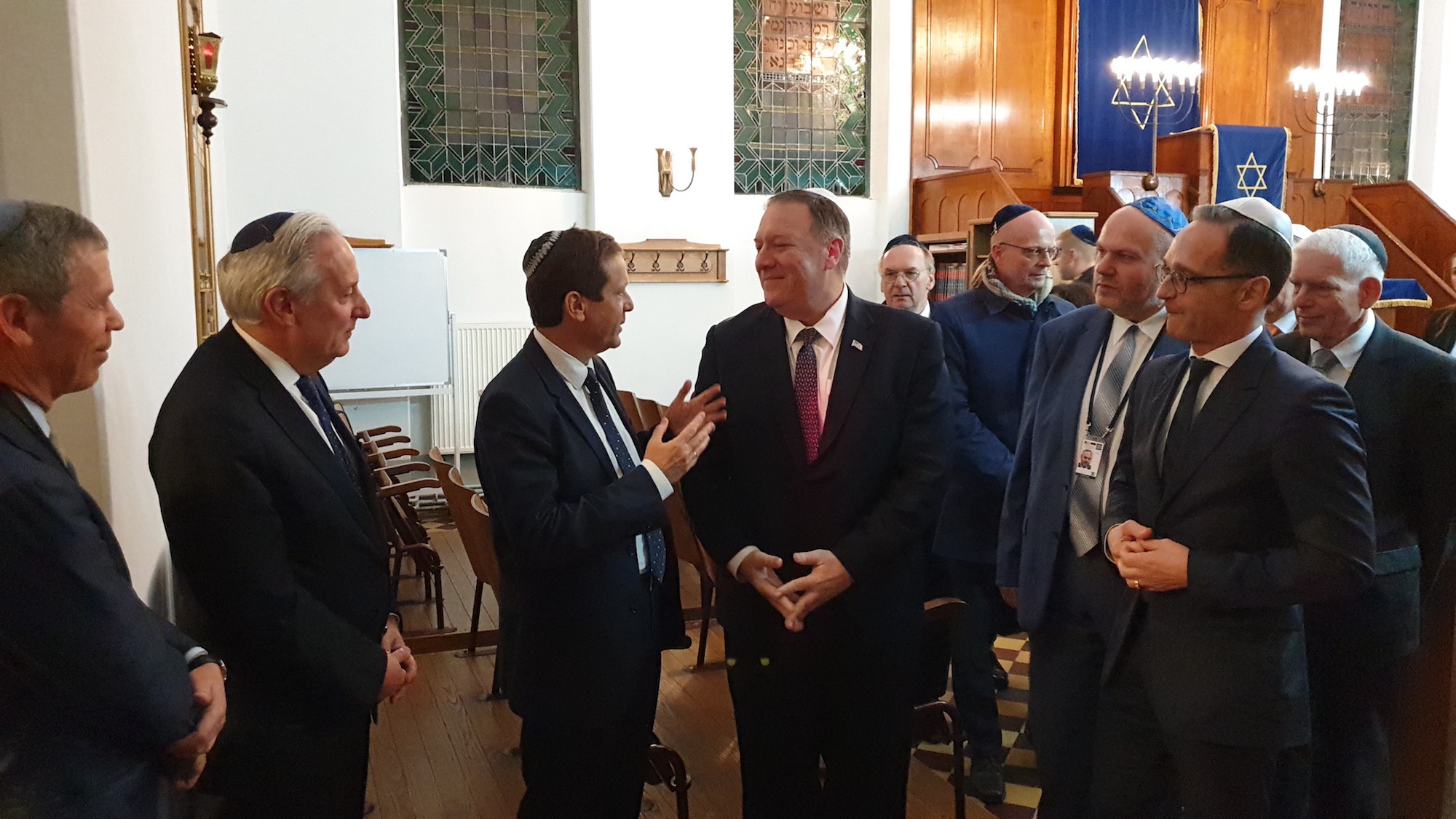 Today, Jewish Agency Chairman Isaac Herzog, along with US Secretary of State Mike Pompeo and German Foreign Minister Heiko Maas, visited the synagogue in Halle, Germany that was the target of an anti-Semitic attack on Yom Kippur one month ago. The attack was carried out on the holiest day of the year for Jews, killing two passersby in the vicinity. The dozens of worshipers inside the synagogue were spared thanks to security measures sponsored by The Jewish Agency.

Chairman Herzog stated at the memorial service that, “There is no question as to the rampant rise of anti-Semitism across Europe. It’s truly a miracle that the Jews of Halle didn’t suffer a massacre on Yom Kippur. Global leaders must unite in a relentless fight against anti-Semitism – by protecting Jewish institutions, and most importantly, by means of education and firm legislation against hate crimes.”

In addition to participating in the memorial service inside the synagogue, the officials also laid a wreath near the spot where the one of the passersby was killed.

US Secretary of State Mike Pompeo remarked: “Our whole team has made a major focus on stamping out anti-Semitism wherever we find it. It’s an honor for me to come here alongside you and share America’s sympathy for what took place here and to remind the world that anti-Semitism is not just limited to certain places. We can find it everywhere… like in Pittsburgh. We must work together against this vicious attack on religious freedom.”

The synagogue in Halle serves the town’s small community of a few hundred Jews. The building currently housing the synagogue originally served as the town’s Jewish funeral home, but in 1948 it was converted into a synagogue, replacing Halle’s original synagogue that was burned on Kristallnacht, 81 years ago this week.

The attack on the Halle synagogue occurred at noon on October 9, 2019 – on Yom Kippur, the holiest day of the year for the Jewish people. Several dozen members of the congregation where inside the synagogue at the time. Thanks to security cameras installed at the synagogue with funding from The Jewish Agency’s Security Assistance Fund with support from the Helmsley Charitable Trust, the security guard spotted the armed terrorist on the cameras and alerted the worshippers who then barricaded themselves. Along with the hefty security door also sponsored by The Jewish Agency, further disaster was prevented.

Chairman Herzog’s visit to Germany is focused on the fight against the rising tide of anti-Semitism and comes on the 81st anniversary of Kristallnacht, the massive pogrom carried out against the Jews on the night between November 9th and 10th, 1938, killing hundreds of Jews and destroying thousands of synagogues, Jewish businesses and homes. Herzog said: “This Shabbat marks 81 years since Kristallnacht. It is inconceivable that today Jews need to remove their kippah (skullcap) in order to walk the streets of Europe.”

This morning, at Berlin’s Central Synagogue, Chairman Herzog said kaddish with Rabbi Yitzhak Ehrenberg over the six million and the victims of global anti-Semitism.

Herzog’s visit to Germany comes on the heels of The Jewish Agency Board of Governors meeting held last week in Jerusalem where a new strategic plan for the next decade was adopted, addressing the greatest challenges currently facing the Jewish people – including the fight against the rising tide of anti-Semitism.

During his visit today to Berlin, Chairman Herzog also participated in awarding the European Janusz Korczak Academy’s Award for Humanism to Axel Springer CEO Dr. Mathias Dopfner for his outstanding service in the fight against anti-Semitism and hatred.

Chairman Herzog will also launch the Nevatim conference, marking 30 years since the fall of the Berlin Wall and 81 years since Kristallnacht. Over one hundred Jewish leaders will participate in the conference, organized by The Jewish Agency with support from the Genesis Foundation. Nevatim is an educational program that supports educational initiatives of young German Jews.