Rescued by JA Staff with ‘Hearts of Gold’ | The Jewish Agency 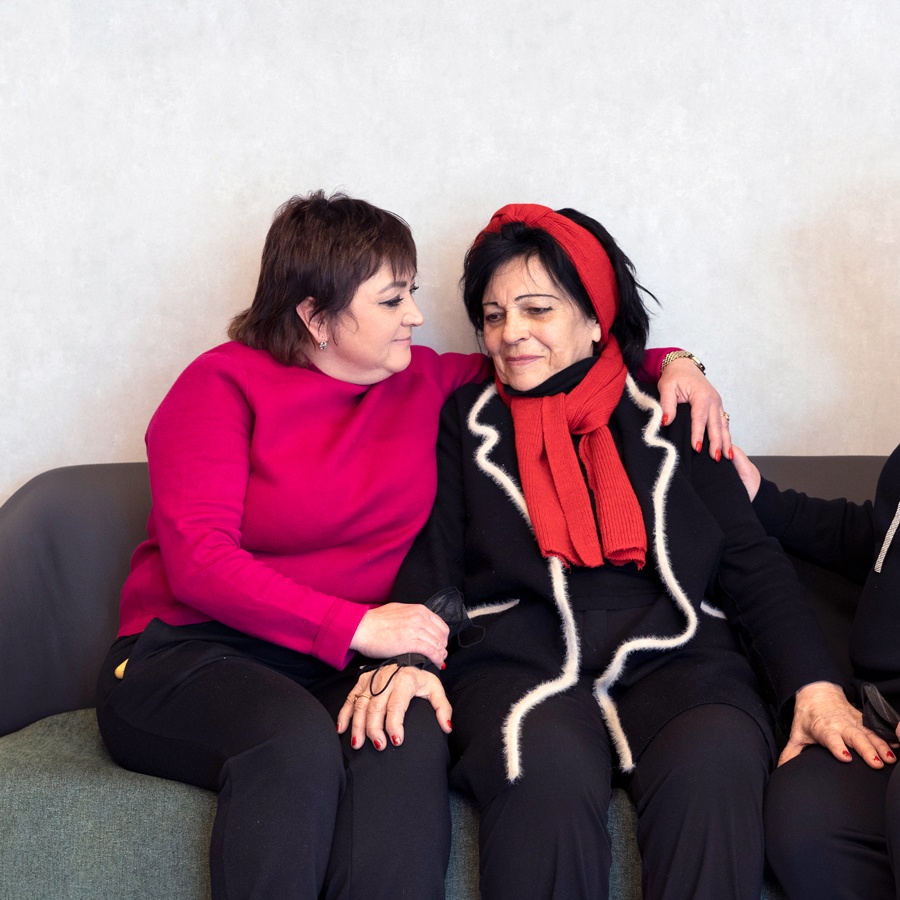 Rescued from Ukraine by Jewish Agency Staff with ‘Hearts of Gold’
Jewish Agency staff worked with sisters Yulia Cherniak and Victoria Semionova to enable their 82-year-old mother Nadezhda’s immigration to Israel, days after rocket blasts shattered the windows in Nadezhda’s home amid the war in Ukraine.

share
Nadezhda and one of her daughters | Photo: Maxim Dinshtein for The Jewish Agency

Sisters Yulia Cherniak and Victoria Semionova immigrated to Israel several years ago, but with the war breaking out in Ukraine, they began to worry about their mother Nadezhda, 82, who stayed behind in Dnipro with their younger brother.

On the first day of fighting, three rockets fell near Nadezhda’s home in blasts so powerful that they shattered the glass in her window frames. Nadezhda was traumatized by the violence and the sisters decided she must be rescued.

“I called Kriel Rabin, The Jewish Agency’s coordinator in Dnipro; I was amazed by his empathy. He treated our story of pain and worry as if it was his own. Half an hour after I called him, he spoke to my mother. And a few days later, he arranged for a seat on a Jewish Agency bus transporting refugees from Dnipro to Lviv,” Yulia recalled. “My brother and his son couldn’t leave because they are of eligible draft age for the army. No matter when I called Kriel, he was always available.”

The bus brought Nadezhda to the border with Poland, and then she made her way to Warsaw, where her daughters were waiting for her. There, they reached out to local Jewish Agency Shaliach (Israeli emissary) Shmuel Shpak.

“He treated us like we were family,” Victoria said of Shpak. “My mother is still in shock. She is afraid of every knock at the door and she’ll start to shake if someone approaches. She can’t be alone, so Shmuel arranged for all three of us to stay in one of the hotel rooms The Jewish Agency rented for refugees.”

Nadezhda experienced a long and difficult journey but received the relief and assistance she needed. She is eagerly anticipating a brighter future in Israel.

“Hearing those blasts put me in a situation where I didn’t understand what was happening to me or where I was,” she shared. “To be honest, I don’t really remember how I got to Warsaw. I was able to slightly regroup once I met with my daughters. Now that this horror is behind me, I’m looking forward to seeing my grandchildren and four great-grandchildren who are waiting for me in Israel, and I can’t wait to hug them.”

The Consulate quickly processed her paperwork and gave her a visa, and she departed for Israel on March 24. Nadezhda’s daughters can breathe easy now as their mother is in a safe place.

“From the bottom of our hearts, we are grateful to The Jewish Agency staff, especially Shmuel Shpak, a man with a heart of gold,” said Yulia. “We were attended to with such dedication that it is hard to describe, and we received help and sympathy from the very first moment we reached out to The Jewish Agency. Thanks again to Kriel, Shmuel, Iruchka Geffen, Sasha Cherniak, and all the other organization employees whose names I don’t know who helped us 24/7.”