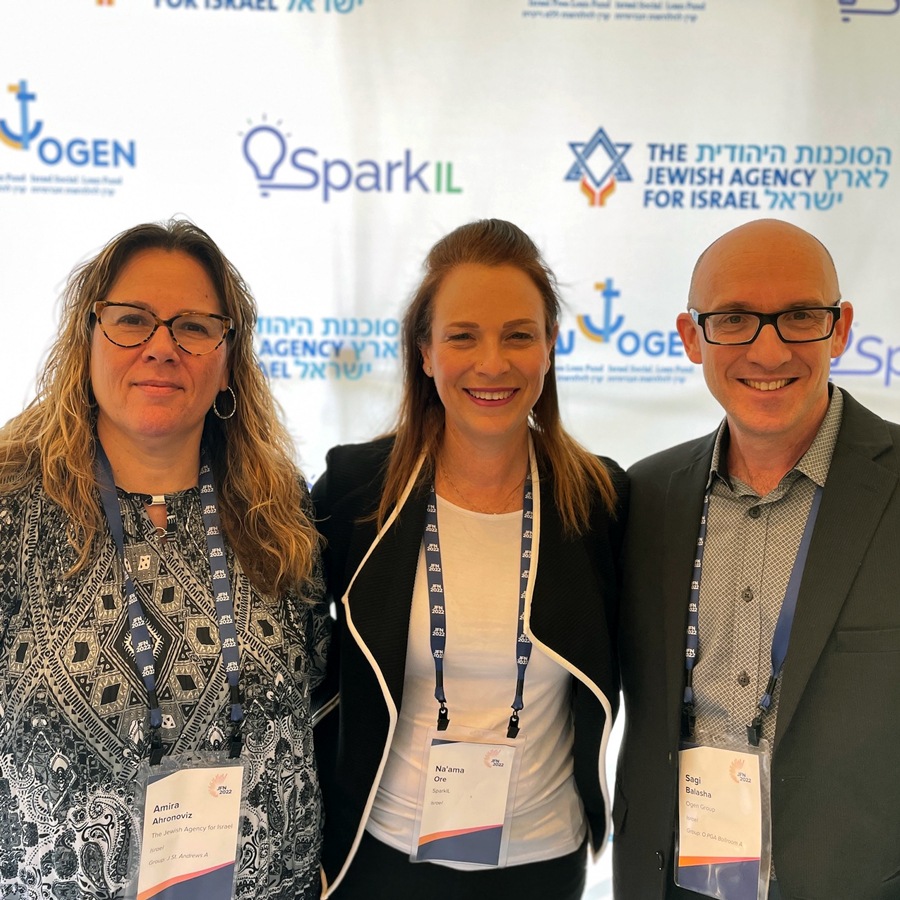 Amira Ahronoviz, CEO and Director General at The Jewish Agency, Na’ama Ore, CEO of SparkIL and Sagi Balasha, CEO of The Ogen Group (from left to right) mark the launch of SparkIL | Credit: SparkIL

New York, June 21, 2022 — The peer-to-peer lending platform SparkIL today announced its launch of a first-of-its-kind initiative that enables individuals to support the small business of their choice in Israel, while strengthening meaningful connections and relationships between the lenders and Israel.

Established in partnership with The Jewish Agency for Israel and The Ogen Group, the platform enables users to participate in crowdfunding interest-free loans which aim to make a real, measurable, and continuing impact on underserved populations across Israel. Crucially, SparkIL’s launch will boost engagement with Israel, its businesses, and its people at a time when emotional attachment to the Jewish state has been declining among younger generations.

After repayment of their loan, lenders can choose to reinvest their money into other worthy businesses — ensuring that their initial loan has ripple effects indefinitely — or to withdraw their funds from the platform. When the borrower’s goal is met, the full loan is released.

“SparkIL presents a unique opportunity to engage world Jewry with the ability to make a direct impact on Israeli society at the ground level,” said Na’ama Ore, CEO of SparkIL. “At a time when we are seeing increased disengagement with Israel, this digital platform could serve as a much-needed bridge connecting lenders with the entrepreneurs and businesses who need their help the most.”

As a digital platform, SparkIL eliminates the barrier of distance in helping lenders make a direct impact on Israel and its people, while fortifying a sense of peoplehood by providing a level of interconnectedness that would not have otherwise been possible.

The Jewish Agency’s unique role as a global platform working in and connecting Jewish communities around the world with Israel, enabled by the direct support of The Jewish Federations of North America (JFNA) and Keren Hayesod, will contribute directly to SparkIL’s unique strategy and capabilities. Ogen brings to the table its knowledge and experience as a critical player in the social finance arena within Israeli society. SparkIL is also made possible by founding partners including the Max M. & Marjorie S. Fisher Foundation, and UJA-Federation of New York, along with a private foundation.

JFNA and the Jewish Federation of Greater Pittsburgh are providing essential support to SparkIL through risk cushions. These funds will allow SparkIL to offer more borrowers opportunities to raise much-needed capital on the platform.

“Rooted in a sense of mutual responsibility, this is a win-win proposition — for lenders who are looking to put their values into action and for businesses with pressing capital needs. SparkIL is poised to contribute toward the goal of securing a vibrant Jewish future for generations to come,” said Amira Ahronoviz, CEO and Director General at The Jewish Agency, and the Chair of the Board of SparkIL.

Further, SparkIL’s interest-free loans represent an important actualization of Jewish tradition and values. In outlining eight levels of charitable giving, the medieval philosopher and Torah scholar Maimonides articulated that the highest form of giving is when a donor or lender empowers the recipient to become self-supporting — a directive generally defined as granting a business loan or helping someone find a job. Guided by this principle, SparkIL allows lenders to help Israel’s social entrepreneurs become self-sustaining.

“SparkIL’s launch is a turning point for the thousands of small businesses from Israel’s socioeconomic periphery who are underserved by the banks,” said Sagi Balasha, CEO of The Ogen Group. “For 30 years, Ogen has seen how loans and access to credit can do so much to strengthen the poorer parts of Israel’s society and economy. It’s exciting that now, lenders across the U.S. can be active daily partners in this new initiative, picking and choosing the loans they want to make through SparkIL’s platform.”

To learn more about the new SparkIL platform, visit: https://www.sparkil.org