Using Food to Educate and Bring Students Together | The Jewish Agency 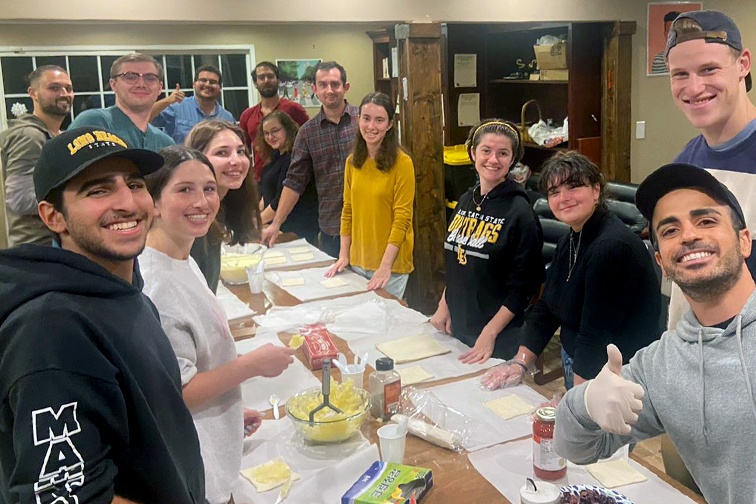 18 Jan Using Food to Educate and Bring Students Together

Using Food to Educate and Bring Students Together

Yarin, a Jewish Agency Israel Fellow at Long Beach Hillel in California, uses his love of food to make connections and educate students about the Jewish people and Israel.

Using Food to Educate and Bring Students Together

Yarin, a Jewish Agency Israel Fellow at Long Beach Hillel in California, uses his love of food to make connections and educate students about the Jewish people and Israel.

Yarin, 30, grew up in Mazkeret Batya in central Israel. After serving in the Israel Defense Forces, he got his BA in education and Jewish history at Tel Aviv University. Yarin then worked as a guide at the Beit Hatfutsot: The Museum of the Jewish People in Tel Aviv. In the past, he worked with American youth, first as a counselor at a Jewish camp in Pennsylvania in 2013 and later, in 2016, as an Israeli guide for a summer Israel trip group. All those positions made Yarin realize how important it was for him to help foster the connections between Israel and Jewish communities around the world.

“Besides my experiences working with Jews living abroad, the knowledge I gained from my studies and general interest in the world of Judaism drove me to work as a ‘bridge’ within the Jewish communities,” shared Yariinn. “I realized that working as a Jewish Agency Israel Fellow would allow me to make an impact and develop a better understanding of the Jewish world while actively working to strengthen it.”

Israel Fellows are Israeli young adults who are post-IDF and university who are brought to North American college campuses every year by The Jewish Agency, in partnership with Hillel. These Fellows help substitute education for ignorance when it comes to student opinions about Israel, creating safe spaces for tolerance and diversity, and give students a chance to develop lasting connections with an Israeli.

Currently, Yarin is an Israel Fellow at Long Beach Hillel in California, which serves ​​students on six nearby college campuses. Before that, from 2019-2021, Yarin worked as an Israel Fellow at Hillel of Silicon Valley for two years. He believes that having an Israeli as part of the Hillel team shows students we are one united Jewish people and that Israel is an important part of our Jewish identities.

“Israel Fellows are the full package when it comes to bringing Israel to campus; our accents, culture, personal experiences and family story. This is important because once students connect to an Israel Fellow and establish a relationship with them, they have a stronger connection to Israel itself,” explained Yarin. “From my experience as an Israel Fellow in the past few years, the younger generation tends to avoid speaking about sensitive topics when they don’t feel comfortable, and Israel is a sensitive topic. An Israel Fellow will create a safe space for students to talk about Israel and ask critical questions.”

For Yarin, a typical week can include coffee dates with students, planning and attending events on and off campus, office work, and more, capped off with Shabbat dinner Friday nights. His Mizrachi heritage is something he’s very proud of so he’s also planned many events throughout the year that aim to educate and celebrate Mizrahi and Sephardic Jews.

Additionally, Yarin is passionate about cooking and baking – his food-focused Instagram account BreadBakeBeyond has over 151k followers and his video reels have collectively been viewed millions of times – and has incorporated his love of the kitchen into his Shlichut (emissary service).

“I do a lot of cooking events as I’m a big believer in food as a powerful educational tool. For every cooking class I plan, I choose a different dish that represents a Jewish community or that highlights something in Israeli culture. As we all sit around the table and prepare our dinner, we also learn about the Jewish people and Israel,” Yarin said. “On top of doing our Hillel cooking events, I also use it as a tool for collaborations with other clubs on campus, which enables us to learn about each other’s culture and traditions. ”

When Yarin returns to Israel, he hopes to take everything he learned as an Israel Fellow and combine it with his love of food to create a platform that will strengthen the bonds between Israel and different Jewish communities across the globe.