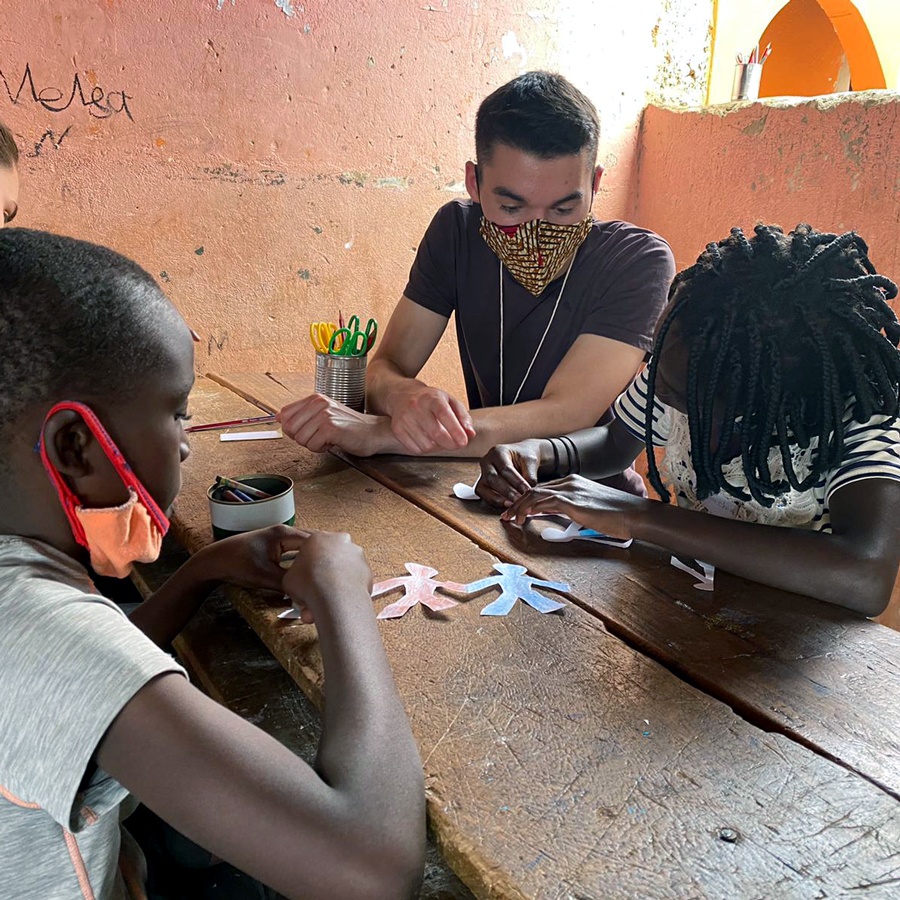 A Powerful Project TEN Uganda Experience
Despite COVID cutting short his time volunteering with Project TEN in Uganda, Ben’s grateful for the opportunity he had to impact the local community.

Ben, 19, from London, has always had a close connection to Israel; his mom is Israeli and his dad is half Israeli. He planned to spend much of his gap year between high school and university in Israel but also wanted to do something different outside of Israel. The ShinShinim (service year Israeli emissaries) in London recommended Project TEN. After checking it out on The Jewish Agency’s website, he knew he’d found the right program and decided volunteering at Project TEN’s Uganda Center would be both a ‘cool’ and worthwhile experience.

“When my cohort arrived in May 2021, we immediately had training for the first two weeks while we were in quarantine,” remembered Ben. “Then we started working in schools and in the local TEN center throughout the week, mostly engaging with kids ages 7-12.”

Through Project TEN, volunteers are part of a service-learning experience using an integrated curriculum that focuses on Jewish values, community, and action while engaging with disadvantaged communities either in Israel and around the world. Ben’s Uganda cohort participants were split into different groups to organize activities: art, thinking games, stories and music. Ben was part of the art group though admittedly, he didn’t consider himself particularly artsy.

“We came up with some really good activities and did a range of projects, like making paper airplanes. We did a lot of cutting things with scissors because it helped the kids develop their fine motors skills through arts and crafts. I was surprised that that’s not something kids necessarily learn otherwise,” said Ben. “We also teach kids to think out of the box, and teachers as well, encouraging them to be creative and express themselves as individuals.”

Most of Ben’s peers didn’t have any notable background in informal education, nor was it required — but it was something Ben was thankful he had.

“My synagogue in England is Reform and they have a large informal education program, including Sunday school and summer camp, that I’ve been a part of since I was 14,” shared Ben. ”So I was in my comfort zone in Uganda very early on. There were a lot of leadership skills I recognized I already possessed that came in handy when working with the kids.”

Because of the coronavirus pandemic, Ben’s cohort had their time cut short. They were given about 10 days’ notice that the program would finish early because of COVID, ending in June instead of July. They were on the ground for just under two months.

“We were all vaccinated but the local staff wasn’t and a coordinator got COVID. Thankfully, he was alright and we were all kept safe and healthy,” Ben said. “But we could definitely sense that there were increasing COVID concerns in the country and that it was a real thing.”

Still, Ben’s glad his cohort was able to volunteer in Uganda for the time they could.

“I have great memories of connecting with kids and meeting local community members. Even though our time was shorter than anticipated, it was a powerful experience and one I’m grateful for,” said Ben. “I felt like we really did good — and I realized it’s not about helping the most people, it’s about helping people meaningfully.”