Building bridges with a lacrosse stick | The Jewish Agency

17 Feb Building bridges in Israel with a lacrosse stick

Building bridges in Israel with a lacrosse stick.
Promoting Jewish-Arab coexistence and friendship—one game at a time.

Masa Israel Journey, a subsidiary of the Jewish Agency, enables more than 10,000 young Jews each year to spend up to 10 months volunteering, interning and taking academic courses in Israel as they learn about Jewish history, build friendships with Jews from around the world and experience Israeli culture on a daily basis.

The Jewish volunteers developed a fantastic relationship with the kids. Primarily, we are teachers and role models. The sport is secondary. 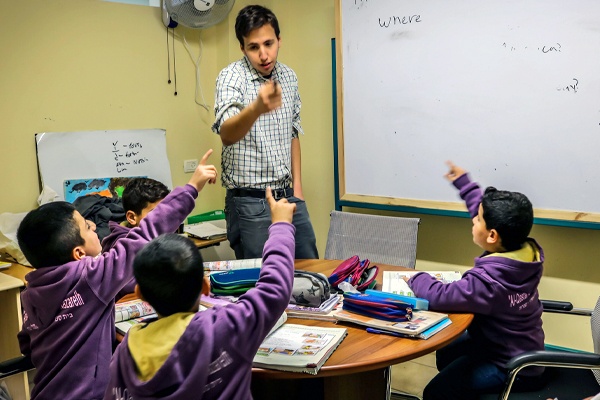 Masa Israel Journey’s Tikkun Olam Internship Track is an opportunity to gain valuable career experience in the non-profit world while making a difference for disadvantaged populations in Israel, and getting to know Israeli society.
Learn more

But for one participant, Ian Cohen, the experience helped him score on another level. A graduate of Monmouth University, Ian volunteered in Israel with Tikkun Olam, a Jewish service learning program supported by Masa Israel Journey. After joining Tel Aviv’s lacrosse team, he had an idea to combine his passion for the sport with his volunteer focus on Jewish-Arab coexistence.

For centuries, members of Native American tribes played lacrosse with one another as a means of forging common bonds. So it makes sense that a group of young American Jewish volunteers in Israel used the sport to reach out to Arab-Israeli teenagers.

“The program is intended to dispel bigotry through real contact between Arabs and Jews,” Cohen said.

Through the Peres Center for Peace, Cohen connected with the Ajyal School in Jaffa, which expressed interest in working with him. He then recruited fellow Masa volunteers and members of Israel’s national lacrosse association (Israel Lacrosse) to help teach the sport to the Arab high-schoolers during weekly clinics.

“The Jewish volunteers developed a fantastic relationship with the kids,” Cohen shared. “Primarily, we are teachers and role models. The sport is secondary.”

The Arab teens are not the only ones who benefited from Cohen’s passion for lacrosse. When rocket attacks from Gaza intensified, Cohen organized a lacrosse clinic in Netanya to provide kids from southern border towns a few days of respite from the daily barrage of rocket fire.

Lacrosse is the fastest growing sport in North America. As long as young volunteers like Cohen bring their enthusiasm for the sport with them to Israel, it might soon be the “next big thing” in Israel—for Jews and Arabs.