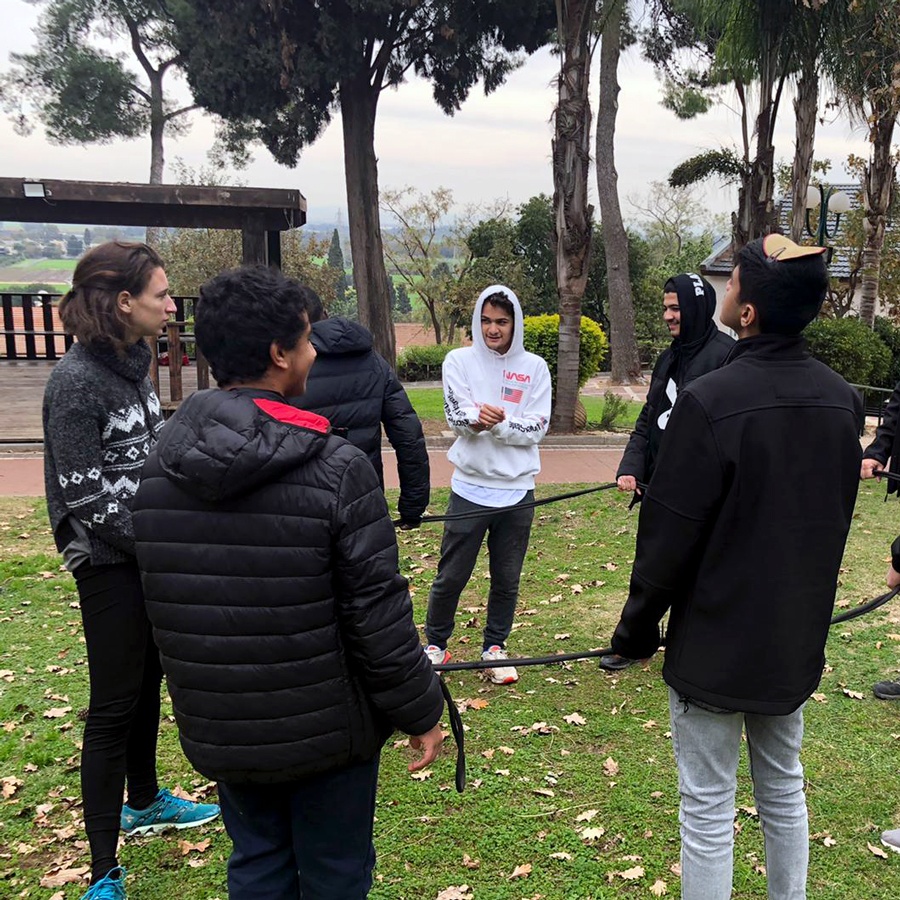 Changing Lives at Ben Yakir Youth Village
Ben Yakir’s dedicated staff, including Oren and Einat, helped students like Yonatan apply themselves to their studies, putting them on paths to success.

share
Students participate in an activity at Ben Yakir

In first grade, Yonatan began dreading going to school. He did not get along with the teachers and started skipping school and staying home. As he got older, he became less and less interested in studying and attending classes, choosing instead to watch TV and play on his computer in his room. For high school, his mother told him they were going to look into boarding schools that would better suit his educational needs.

“When I started to look at boarding schools, the problem was I didn’t feel like I’d really fit in at any of them. On the one hand, I was belligerent and didn’t study. But I didn’t smoke or do drugs, and I didn’t have a criminal background,” Yonatan recalled. “I checked out a lot of places and didn’t get accepted, until Ben Yakir. I was very against going there but it was my only option.”

Ben Yakir is The Jewish Agency’s boys-only religious technological youth village, based in the Kefar Haroeh settlement in Hefer Valley in Central Israel. In 2021, Ben Yakir was home to about 120 students, in grades 7-12, many coming from disadvantaged backgrounds and homes with a non-functional family structure. About 50% of the students are immigrants who made Aliyah in the last seven years or so, and nearly 25% of them are Ethiopian.

Yonatan had a rough start at Ben Yakir, and by the end of ninth grade, he was adamant he would not go back after the summer break. But during vacation, he found himself missing the bike elective he’d been a part of and missing the structure.

“I realized that I needed a place of refuge, mostly from myself. So I went back to Ben Yakir,” said Yonatan. “Still through 10th grade, though I’d go to class, I wouldn’t pay attention and intended to do that same through 11th and 12th grade – but my mom’s encouragement and impending matriculation exams changed my behavior. I knew if I wanted to graduate with my diploma I had to apply myself and study. So I did, and I took exam after exam, and I did not fail.”

“I did not make this change on my own. There were a lot of people at Ben Yakir who helped me along the way and I am very grateful to them for not giving up on me. I would have given up on myself a long time ago,” added Yonatan, who recently graduated from Ben Yakir.

Oren Spielmann, the former Director of Resource Development and Community Relations at Ben Yakir, knows for the many kids who come to Ben Yakir from difficult backgrounds, ranging from addiction issues to emotional and cognitive problems, and more, Ben Yakir is a lifeline.

“Because our classes are small and the staff is qualified and dedicated, we have the right framework in place so that kids can be themselves and succeed. We are really changing and saving lives, putting these young adults on better paths, prepared for the army and for life,” said Oren. “Ben Yakir is a safe place for our students and they quickly come to understand they will be embraced and accepted. I’m proud to have worked there.”

Einat Gilad, who took over Oren’s role at Ben Yakir after having served as the village’s Director of the Educational Hub, a position that had her helping students study and do their homework multiple times a week, fell in love with Ben Yakir the first time she visited.

“If my sons were not on the right path academically, and they were religious enough, I’d put them here in an instant. The village is beautiful and kids are pushed to excel and to graduate, no matter their backgrounds,” said Einat. “Ben Yakir gives kids everything they need, teaching them to love Israel and Judaism, and how to be good citizens. We put them on paths to success and keep in touch with our alumni, continuing to offer support because they are still part of our community. Working here is really so fulfilling.”