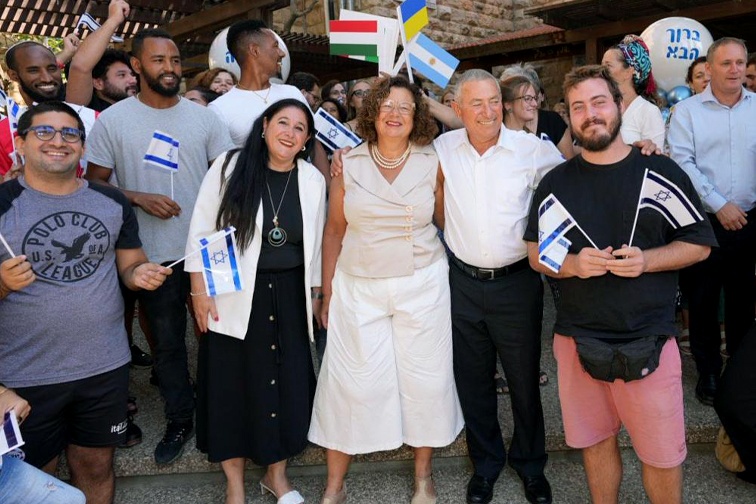 22 Aug Doron Almog Embarks on Chairmanship of The Jewish Agency

Almog tells olim at Ulpan Etzion: “Welcome home! You came from all corners of the world to build your new home in Israel and to join us all in building the future of the county.”

Almog tells olim at Ulpan Etzion: “Welcome home! You came from all corners of the world to build your new home in Israel and to join us all in building the future of the county.”

Doron Almog with his wife Didi at Ulpan Etzion on Sunday. Photo credit: Maxim Dinstein for The Jewish Agency.

Jerusalem, Israel, August 21, 2022 – Major General (res.) Doron Almog on Sunday assumed his position as Chairman of the Executive at The Jewish Agency for Israel. Almog, who has made it his mission to foster greater togetherness among the Jewish people and the State of Israel, chose to commence his first day in office by meeting with 180 young olim (immigrants) at Ulpan Etzion in Jerusalem.

The olim arrived in Israel last month from 30 different countries, including some nations which do not have diplomatic relations with Israel.

Ulpan Etzion, a flagship Jewish Agency program, was founded in 1949 as the first center for immersive Hebrew studies in Israel. On an annual basis, Ulpan Etzion serves hundreds of immigrants ages 22-35 from around the world. The new olim reside at the ulpan for five months and, along with intensive Hebrew lessons, participate in activities to familiarize themselves with Israeli society and to prepare for entering the job market. Among the olim in the program’s current cohort are doctors, engineers, lawyers, architects, journalists, athletes, artists, teachers, and IT professionals who will soon integrate into the Israeli economy.

“Welcome home!” Almog told the group of 180 olim at Ulpan Etzion. “You came from all corners of the world to build your new home in Israel and to join us all in building the future of the county. Each and every one of you contributes to the strength of the country and the strength of Israeli society.”

He added, “The connection with global Jewry and Aliyah (immigration to Israel) are of strategic, existential importance to the State of Israel and the Jewish people. As you establish yourself in Israel, please continue to maintain close contact with your families and friends overseas. Under my leadership, The Jewish Agency will continue to assist every Jew who wishes to immigrate to Israel and lead Aliyah rescue operations across the globe.”

Almog will devote his first days in office to becoming thoroughly acquainted with the breadth of Jewish Agency activities in Jewish communities worldwide and throughout Israel. Among other things, he will meet with representatives of Jewish communities, new olim from around the world, young people who came to Israel on Masa Israel Journey career and volunteer programs, seniors and Holocaust survivors residing in Amigour facilities, and at-risk youths who are part of empowerment programs. In conjunction with his position as chairman of The Jewish Agency, Almog will continue to serve as chairman of ADI Negev – Nahalat Eran, promoting further development of the village for residents of southern Israel and people with disabilities.