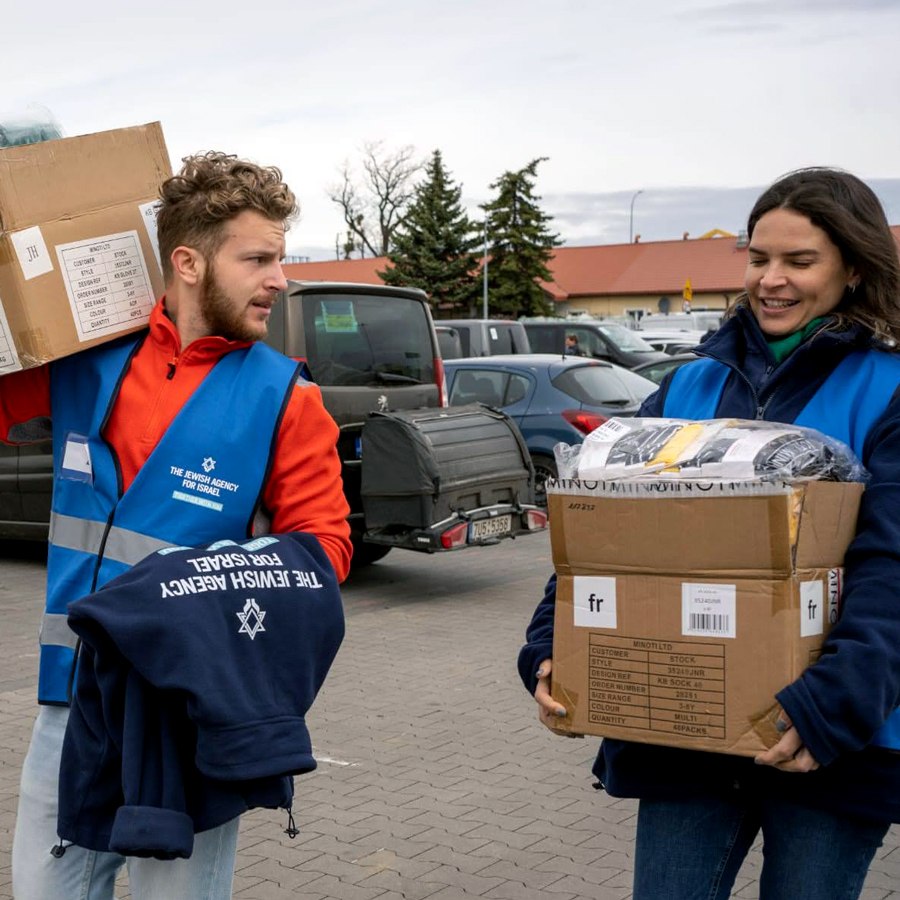 Fulfilling His Calling: Helping Ukrainians in Crisis
Andrey made Aliyah from Ukraine on his own at 17 but was back in his native country visiting when the war broke out. He got himself, his mom, an elderly woman, and a young mother and her child to safety in Israel – then headed back to the region to help others at The Jewish Agency’s refugee centers.

Growing up, Andrey always felt a strong connection to his Jewish identity and to Israel. When he was 17, about to graduate from high school in Ukraine with no clear plan, Andrey learned about The Jewish Agency’s Selah program, which brings young Jewish immigrants from the former Soviet Union to Israel in hopes that their families follow them. Since he knew he wanted to one day make Aliyah and join the Israel Defense Force (IDF), Selah was a perfect fit for him as he could learn Hebrew, get to know Israel and get ready for meaningful military service.

“Making Aliyah to Israel is not easy, especially when one is coming by themselves, but Selah made it easier. Even after the program ends, you never going to be alone and Selah was and still is my community,” shared Andrey. “Still today, I talk to new Selah participants and make them feel at home.”

When Russia invaded Ukraine, Andrey had just finished his IDF service and was back in Ukraine, having surprised his mom for her birthday. On February 24, his mom woke him up to the news that Kyiv was being bombed. Andrey didn’t hesitate, quickly packing up their things, already having their ultimate destination in mind: Israel.

“When the war started, I tried to help as many people as I could and get my mom to safety,” said Andrey. “After we set up a bomb shelter in my mom’s neighborhood, I cooked and delivered food to soldiers at the checkpoints and assisted in delivering food to homebound elderly. I felt a profound sense of responsibility for my family and the Ukrainian people.”

Andrey worked out an evacuation plan and a few hours before Andrey and his mom started their journey, they received a phone call asking if he was willing to help an elderly woman and a mom with a one-year-old leave as well. Within a few hours, the group of five were on a train to west Ukraine. En route, Andrey got an update that a bomb had hit an apartment building right next to where they had been staying.

When they arrived at the Ukraine-Hungary border, they waited for five hours in the cold to cross. Andrey held the child in his arms the whole time and carried him across the border when their time came. From the Hungary border, they traveled via train for five hours to Budapest. Finally, after a 22-hour journey, Andrey felt relief. A few days later, they were all on a flight to Israel.

“When I was at the border, looking at all the other refugees, it struck me: they didn’t know where they were going. But we knew where we were going, that we were going to safety, to Israel,” Andrey recounted. “Thank god we have our own country. Because I knew the people of Israel, and those from Selah, will help me and my family; that is the power of peoplehood.”

Once Andrey got back to Israel, he searched for ways to help Ukraine and Ukrainian refugees. He learned from a former Selah counselor, Yegor, who was working with The Jewish Agency on the Poland border that he could also volunteer. Andrey didn’t think twice.

“I felt this was my calling because if not for The Jewish Agency, I would not have come to Israel. The Jewish Agency changed my life and then gave me the ability to help other Jews in a moment of crisis.” shared Andrey. “It was amazing to see how its staff acted at the borders helping Ukrainians. We were there to welcome refugees, provide them with a safe environment, give them shelter and food, and guide them on their next steps. And most importantly, we were there to listen, to hold them when they fell apart, to tell them everything was going to be okay.”

After two months in Poland, Andrey was asked to manage The Jewish Agency’s humanitarian operations in Moldova and continues to help refugees and offer assistance as they figure out their plans. He urges the world to “keep Ukraine in our minds, hearts, and actions, so Ukraine will keep fighting, for all of us.”

Special thanks to Ana Sazonov for helping with this story