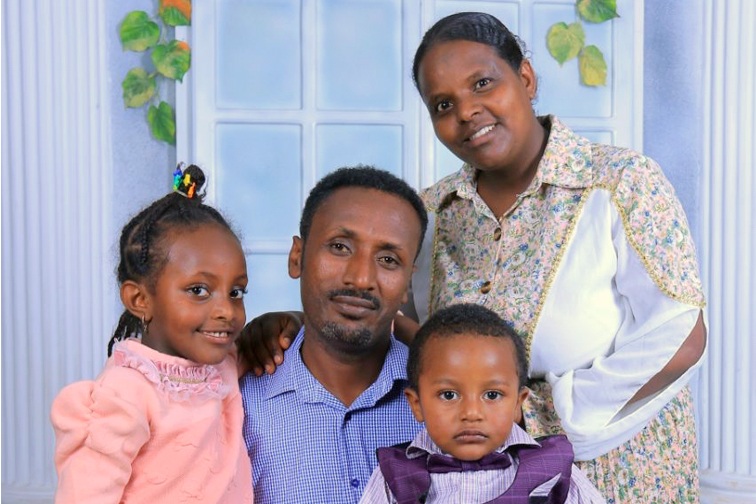 After 25 years of waiting in Ethiopia, Felegu and her family, as well as her three brothers, made Aliyah through an Operation Zur Israel flight on September 14, 2022.

After 25 years of waiting in Ethiopia, Felegu and her family, as well as her three brothers, made Aliyah through an Operation Zur Israel flight on September 14, 2022.

Felegu and her husband, Abay, are both 35 years old and have two children, ages six and two. About 25 years ago, together with her father, her brothers and sisters, Felegu moved to Addis Ababa in order to immigrate to Israel. After about three years of waiting, Felegu’s father and one of her brothers immigrated to Israel while Felegu and her other three brothers were left behind.

They will all make Aliyah on the September 14 flight of Operation Zur Israel II; Felegu and her family, and Felegu’s brothers: Andihanau (36) who has a bachelor’s degree in teaching, Fasil (33) who is trained as an engineer and Gatnet (27) who has a diploma in the field of construction.

Felegu has a bachelor’s degree in accounting and has worked for 10 years at a large company, managing about 60 employees. Her husband, Abay, who has a diploma in electronics, owns a business in the field.

Felegu is very excited to make Aliyah, so much so that she has trouble finding words to describe her immense joy. She said: “I pray that I will arrive on Wednesday, the day of the flight, safely.” Her brother, Gatnet, added to his sister’s words, saying in Hebrew: “With God’s help, I will see my father again after many years.”

When the brothers received the exciting news that they would immigrate to Israel soon, the brothers called their father to share their joy with him and Gatnet said it was an emotional conversation, filled with tears of happiness, for which they had been waiting for many, many years. The brothers and Felegu are also looking forward to finally hugging their nephews and nieces whom they had never met.

Felegu describes the moment of meeting and hugging her father as “the day I will be born again.” Gatnet added: “When I arrive in Israel, I want to hug my father and then kiss the land of Israel.”

In the years that Felegu has been separated from her father and brother, the family has been through many challenges as well as tragedy: Felegu’s sister was unfortunately killed in a car accident about 12 years ago in Israel.

Felegu’s dream is to educate and raise her children to love Israel and its people, and to serve the country as well. She hopes to successfully integrate into society and engage in her field of expertise, accounting.

They will settle at The Jewish Agency’s absorption center in Ashkelon.

Watch the live streamed broadcast from the tarmac as a flight of 200+ new Ethiopian olim (immigrants) landed at Ben Gurion airport in Israel on September 14, fulfilling lifelong dreams and reuniting families and loved ones >