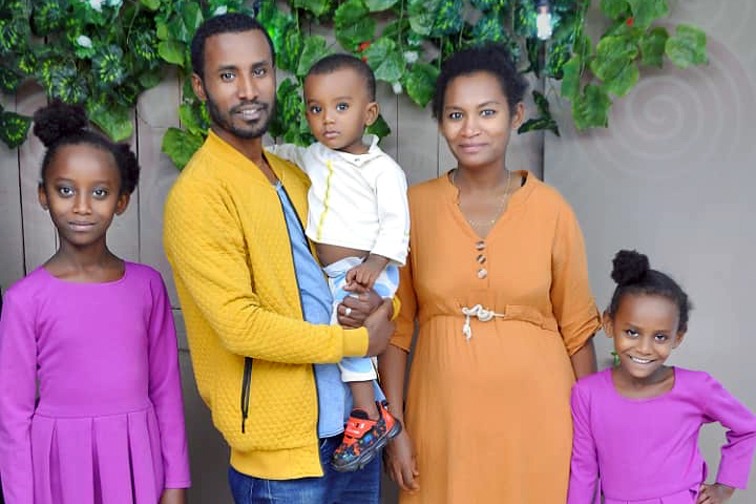 After 24 years of waiting in Ethiopia, Simachew and his family will make Aliyah through an Operation Zur Israel flight on September 14, 2022.

After 24 years of waiting in Ethiopia, Simachew and his family will make Aliyah through an Operation Zur Israel flight on September 14, 2022.

Simachew (40) and Habtem (36) are married with three children, ages nine, six and one. Simachew, along with his mother, brother and four sisters, arrived in Addis Ababa 24 years ago and has been waiting since then to make Aliyah.

Two weeks ago, his sister and her family immigrated to Israel as part of Operation Zur Israel II, settling in at The Jewish Agency’s absorption center in Be’er Sheva. Simachew and his family will make Aliyah on September 14; tune in to watch the live streamed landing.

Simachew and his family are very excited to be moving to Israel. When he received the news about the Ailyah approval, all he could say was: “A great dream that has come true.” His voice rang with great excitement to the point that he could not describe in words his feelings and emotions.

When asked what the first thing he would do upon his arrival in Israel, Simachew answered, that first thing, he wants to meet his four brothers and sisters; he has not seen his eldest brother for 30 years and two other brothers he had never even met.

“The meeting will be exciting and powerful because it will be a meeting of brothers and sisters who we thought of and missed each other for many years even though some of us didn’t know each other at all,” said Simachew. “And also stepping onto the land of the holy city, Jerusalem… for me, it has a great meaning.”

At the family reunion, Simachew’s father will, unfortunately, be absent as he passed away two years ago after many years of waiting for his family to be together.

And secondly, “stepping on the land of the holy city – Jerusalem, for me it has a great meaning”.

“I know that the State of Israel is a land that brings together Jews from around the world and I am excited for the meeting of all the different cultures and groups. I am going to do everything in my power to integrate into Israeli society. And I understand that the key to all of this is the acquisition of the Hebrew language which can help me remove barriers.”

Career-wise, Simachew strives to integrate into his profession in Israel and thus contribute to Israeli society.

On September 19, 2022, the family will be taken in at The Jewish Agency’s absorption center in Ashkelon.

Tune in on September 14 at 11:30 a.m. ET for a live stream from the tarmac as a flight of 200+ new Ethiopian olim (immigrants) lands at Ben Gurion airport in Israel, fulfilling lifelong dreams and reuniting families and loved ones >